Toss the stupid hinges and bolts and use hood pins instead

One of the most annoying things for me is having to take the darned front or rear end off to do work on the GEM. It’s only 12 or so bolts for most people but I’ve done modifications and it just doesn’t need to be that complicated.
I’m not much of a JDM guy but I took this trick from those drifter/import types and made it fit my needs.

Now I can push two buttons and the front fenders pop off the GEM. Ideally, I’d love 4 hood pins upfront instead of the janky jeep latches I’m using but that’s my issue not yours. The rear end is much easier and I will do that in a day or so with 4.

You can buy these hood pins from Amazon or search for them yourself. I used the really really big ones. They are quite nice and 100% metal, which I was not expecting TBH.

They require some fiddling to get just right as all things do, but they aren’t a hard mod. A cutoff wheel, a drill and some level of cleverness is required.

Awesome. Will be looking into this mod shortly.
And, as always, go Buckeyes!

I can’t pick up on what they are or how they work.

Are you familiar with hood pins? These are the traditional style. 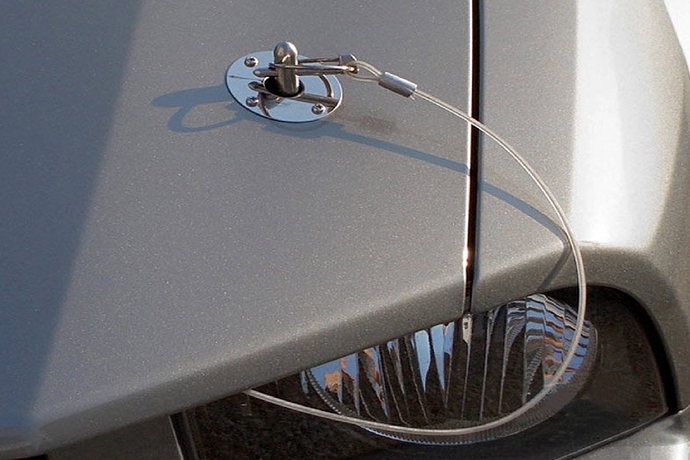 The one I picked are just a different variety. It’s a big bolt with a rounded off head. The head goes inside of the big black button and engages, locking the hood or item in place. You push the button in the middle to disengage the latch.
Now I can take the entire front or back fairings off just by pressing a few buttons.

I see the link now.

Maybe I don’t take my hood off enough to see how it works.

Ignore most of the video and focus on the last few seconds when I push the 2 buttons on the bottom. Those are the hood pins I put in.

Here is a pair of hands fidgeting with the same ones. Maybe this will help.

I picture the hinge pins cross wise, but hood lifts up or toward the front.

I see it now. Drilled through the hood. No hinges. Black on black is hard to see.

My hinges were all wonkey and never worked quite right so by using these instead I just removed the hinges. Also, my front basket makes things more complicated than most.

Here is a one handed video of my initial test fitting of the rear spat using hood buttons instead of the factory bolts.
All the rear plastic is getting rejuvenated soon so excuse the exposed paint and scrapes. Normally you can’t see it due to my truck box.

Well done. Imagine how much time we’d all have saved if this was our first mod.

hah. Yeah the first few times I started taking that thing off I’d invariably walk 2 steps and yank super hard on the clearance light wires and the backup camera wire.
The tape note helped. Unfortunately now I just forget to plug them back in.

I see it now. Better buy stock in the hood button company.
Are they as nice as they look?

Are they as nice as they look?

Way better than I expected. they are 100% metal. I presumed they were plastic when I bought them.
My only big suggestion is to make sure you have a 1 1/2 hole saw.

I’d have to see it in person. But so far looks clean

I do. You have to have them all lined up just so in order for the button to pop smoothly or latch. Even then sometimes the button is kind of hard to push on one or two. If the button is really small and of the 5$ quality, I can only imagine the action and fitment being subpar and making the entire process cumbersome.

In hindsight, I might have gone with these instead. They are a bit smaller and have a mechanical advantage of being a lever. A lock too.