The other day while stopped at a stop sign a skate boarder grabbed my trunk lock and went for a ride before I noticed him and punched it. Shortly after I found the button was sticking and would not budge when attempting to depress and open the trunk.

Last night in the dark I got the idea of using the key to lock and unlock to see if that helped but now I can’t recall if the pin tumblers are supposed to be to the front or to the back for the unlocked position.

Can someone check and if anyone knows where to get a replacement that’d be helpful too. Thanks

What a PIA. the inside latch sprung off and it finally opened. It appears the bottom of that latch is worn off the three little skids and is super rough. Had I greased instead of oiled it probably would have worked better.

Going to look for a thin sheet of teflon and then look for a replacement lock.

After scanning 12 pages of locks and latches I think I found it!

Worked well, only had to reuse the finger hold since the new one was 90 deg out( sideways ).

The one I got from China is working great and as noted, I only had to take off the finger hold part and reuse it since the new one would have been sideways but that part is tough and in good shape.

Sorry I forgot to post the link.
Your
Correct some latches the handle Can be taken off and Orientated in any direction So that it works for your specific application

That’s not what I was saying… The handle can only go on one way on the GEM OEM and on the replacement I got from Aliexpress. The GEM OEM had a flat spot on one side which meant the thumb lift was facing to the rear of the vehilce, The Aliexpress one had the flat side of the mount the same but the thumb handle was oriented 180 deg off with the thumb lift facing the front of the vehicle. So I just reused the thumb pull from the OEM lock and tossed the new thumb pull.

The previous Amazon link is out of stock, this looks similar… 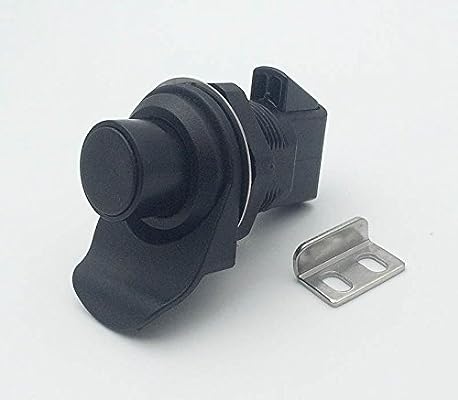