RE: Lithium. Only for the electrical Guru’s?

Hey guys, it seems you two are the go-to for lithium. I have an ‘06 e4 that I bought from a guy in Northern California a little over a year ago. It has a lithium setup that I believe Inwo did (that’s what the guy I bought it from said). The initial batteries in it were so swollen they blew the strap out that holds the cels together. His brother had a couple on the shelf he was going to use for another project that he gave as replacements. Those had a bit of a swell as well but worked for a while. It came with a chargery BMS but the other batteries have a different pin configuration so the pigtails couldn’t hook up to the BMS. I stupidly ignored it for a bit and now the cart doesn’t go. My thinking is it’s the batteries-I basically ended whatever life they had left by not paying attention. I’ve basically come to the conclusion that with my limited knowledge of the finer points of the batteries I’m probably better off starting fresh and having a proper set up. I’m not swimming in cash but I think this is my best bet, especially since I don’t think they were treated properly before I got them. The delta-q is programmed and I have a mm in it. When it ran ok I was in the 35mph range on flat ground. I do live in a hilly area (Ocean beach/Point Loma if you’re familiar with San Diego) with some pretty steep, short climbs at times. Range isn’t super important, just don’t want the hills to suck all my distance out. Top speed in the 30-40 range is just fine, enough to keep me out of trouble on my short jaunts on the busier thoroughfares. Everything else is stock. Let me know what you guys have available and what you think my best set up is. I can turn a screwdriver and drill a hole and possibly more. I can’t solder wires for ■■■■, especially small gauge ones. Thanks in advance.
Pablo

I’m out of batteries and probably won’t have any until later in the year. Hard for me to get and my full time job keeping me way to busy. I would suggest starting a public thread so others can contribute info.

Were they the green cells or maybe Chevy Volt modules. They may very well have come from me, but not installed by me. Chargery bms has proven to kill batteries. I hate to say it, but they just can’t get it right.
All I have are the big Tesla batteries. $3500 complete. Needs 40" from front of back seat to axle.
If you find something for diy, check with us first. Some work better than others.

Ok if I make this public?

The Tesla interests me, but I’ll have to measure. I’m ok with going public as I’d like to get it up and running again, soon. Does the $3500 include shipping?

No it does not. I know it’s a lot of money, but almost 20kwh. More than a complete Volt battery.
No one needs a battery that big, I know.

I’m in San Diego and happen to have 1/2 of a full Volt battery sitting in my garage I’ve been trying to decide what to do with… One of my buddies has a 2002 that he wanted lithium in so we split a full Chevy Volt battery. 1/2 went in his car, I kept the other 1/2 for…?? not sure… I got the (3) 12s + (2) 6s 1/2 of the pack. I have a backlog of projects and not a ton of time these days but could probably help you out and part with some packs. I think @dougl is in your area too if you need another local resource.

I just picked up a tesla battery from Inwo and it was delivered last week. Go figure on the timing, you could have piggybacked on shipment. I’m out in the SDSU/Del Cerro area so with the tesla pack, I should be able to drive to your neighborhood, spend the weekend down there cruising around, and drive home without ever charging.

Throwing in 2 12s Chevy Volt packs could be your path of least resistance and cost.

Chargery - I had issues with balancing on mine. I eventually manually balanced all the cells and then just turned balancing off. Basically used it for SOC and charger control.

let me know if you’re interested in going Volt and I’m sure we can work something out.

I have volt packs in the cart currently, so
I have no problem going that route. I trust the batteries, I’m pretty sure the ones I got were mishandled by the guy I bought from. If the other half are doing their job in your buddy’s cart then I’ll take whatever configuration you think would suit my needs, you’ve got bigger hills than I do so you know what I’ll need. . I’d love to do the Tesla as well but we are just finishing a remodel and money is a little too tight to splurge if I don’t need to!

As @Erniea15 mentioned, I’m also in San Diego( Pacific Beach area ) and can help out if needed.
@Inwo kits would be the way to go since there are lots of parts to a lithium upgrade and when all is working well there’s nothing to do but charge them when needed. But if the BMS or charger isn’t doing its job then Lithium, like Pb, does not like to be abused.

Can you send some pictures of what you have? I was assuming you had the chargery BMS with @Inwo’s yellow harness and the previous owner gave you some other battery that wasn’t plug and play with the volt harness.

My thought is if you have all the components to get you running with the volt setup, let’s just swap the batteries, configure it right, and you’re on your way

I thought I had some but I can’t find them. I will get some today after work. 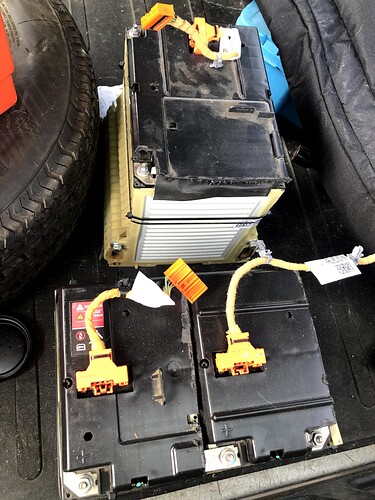 Not sure if this uploaded, but this is what the packs look like. I believe I have two running, front to back. Chargery was never connected to the batteries. I’ll get more later today, but this is a start

Chargery was never connected to the batteries

That explains a lot.

y the guy I bought from. If the other half are doing their job in your buddy’s cart then I’ll take whatever configuration you think would s

I’ve a 24s Bolt pack (3 x 8s) from @LithiumGods with a couple uses. I wanted to sell the whole Gem because I have a 2016 one and went to that direction but I might just sell the pack. (I still think that @inwo battery is better IMO) so if you can fit it definitely go for that.

Not sure I can swing the Tesla, timing isn’t right. Curious to know what the cost of the Bolt pack would be? Just want to weigh the options.

You will need to Flash your charger with the Lithium Profile (@LithiumGods can do it) also you will need a Voltage spoof because you controller will show you a high voltage Error (@LithiumGods or @inwo can make one for you, its not complicated)