I pulled the trigger on a 2014 e4 with 650 miles and am picking it up tonight. It comes with factory hard doors. We paid more than we were hoping to, and don’t really need the doors, so I was thinking about maybe selling them. First off, is it relatively simple to remove them, and for someone else to install them on their GEM? Secondly what’s a fair price? GEM was garaged and they are in perfect condition. Looks like they list for $5,500 new. 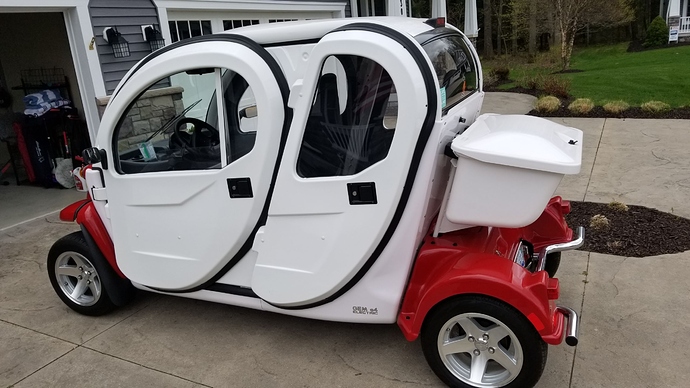 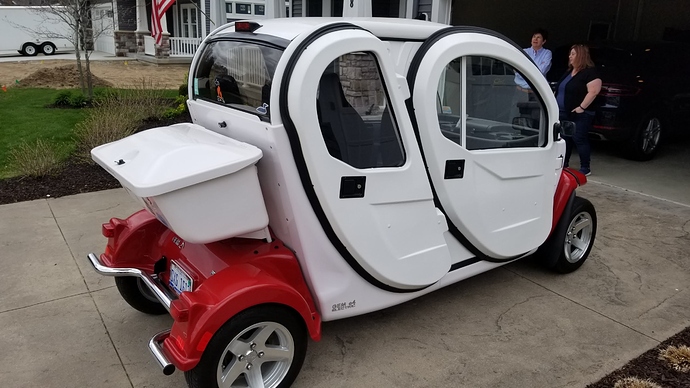 No idea on doors, but I really like your rear"bumper". Did yours come with it or did you add on?

It came with the chrome bumpers, front and back.

From what I understand, pretty difficult to remove factory hard doors and install on another. Couldn’t find a shop that had done it. The manual pix look like there may be some supports welded in. I was going to get some used hard doors for mine but couldn’t find the answers I needed before I spent the $750 they were asking. Those were local too so I didn’t need shipping, probably fairly expensive for something that size. I put rigid frame soft doors on mine and they’re great for what I need.
Good luck with the sale and great looking Gem.

Your doors are Unique. They only made those doors for a few years. I have a friend that has been trying to sell a set of hard doors for quite a while. He was asking $1000. Not sure what you would be asking for yours.

Grantwest: I like the doors, don’t get me wrong, it’s a great feature, especially since mine also came with the optional heater. So for $1,000 I think I would keep them. I was just looking at the cost to buy them new of $5500 and thought if I could get half of that to offset some of my investment, I would definitely consider it.

Hbbill: I took a close look at the attachment points and it doesn’t look like any welding was required, just bolts. Took a bunch of pics/video.

I think I’ll post them for sale for what I would take for them, and if nobody wants them I’ll just keep them. Thanks for the input!

That is a consideration but I feel like to the right person they may have more value on their own, and I don’t plan on selling the gem anytime soon. I was able to get a copy of the installation instructions confirming that no welding is needed. Also confirmed that the kit is no longer available for purchase as it has been discontinued. So that should add to their value.

Sounds Good, let us all know if your able to find a buyer for $2500. Ask if he has a friend that’s intrested in some other doors my buddy has for sale $1000

But what do I know? I have only bought and sold like 20+ gems most of them with doors

You have a Unique Premium cart. If you sell the doors you will devalue the cart by about 50%. This door set up is very late and the best set up GEM produced.

With proper marketing you can get $7 to $9000+ for your cart. Then you can buy a regular 4 passenger. and put money in your pocket.

Thanks Rodney. I appreciate your insight.

Very nice looking GEM. I would keep the doors , you will need them later on.

Hbbill: I took a close look at the attachment points and it doesn’t look like any welding was required, just bolts. Took a bunch of pics/video.

Do you still have those photos? Did you find any instructions on installations. Looking at a 2014 e4 with rust on the door support. Don’t know how deep the rust goes.