2013 e2
I read a thread where mention was made of an alternate socket for the turn signals that also had running lights
Anybody know of these parts?

I don’t know about the 2013 model but my 2002 and 2008 both don’t have a “running lights only” mode. There is only the headlights/Lights-On mode there’s no need for front running lights since the headlights would be on. If you are wiring up another mode/switch you could wire in a relay which adds a resistor in series with the 12V to the front turn signal lights for running lights mode.

The LED rear lights I installed have the running light option but they are just dimmed operation of the same LED components in the light housing. ie lower power(voltage*current) for running light mode.

Just a thought if you don’t find a bulb/housing with the 3rd wire. ie make your own.

Thanks for the reply

Years of riding motorcycles convinced me, being seen reduces the number of near misses
No idea why DOT approved GEM without clearance lights & reflectors

I want headlights & running lights, since there really aren’t side markers.
The present socket has a tiny rubber plug where the 3rd wire would go, but only two contacts.
The oem socket is probably some Chrysler part
The present bulb is a double filament incandescent bulb
I wouldn’t add a switch, just wire the running lights to the beacon
I’ll be adding some led clearance lights to the pipe rack & bed
Just ordered a 72vdc to 12 & 5vdc converter for stereo & festive/clearance lighting which will get a fuse & possibly a switch, I may just relay & diode it to the headlight switch [low beam], for maximum effect when flashing brights
I’ll keep the systems separate & hook up with sae connectors for ease of maintenance & versatility
I add these to every motorcycle for hooking up tenders
I may just add one the each battery on the GEM for similar reasons 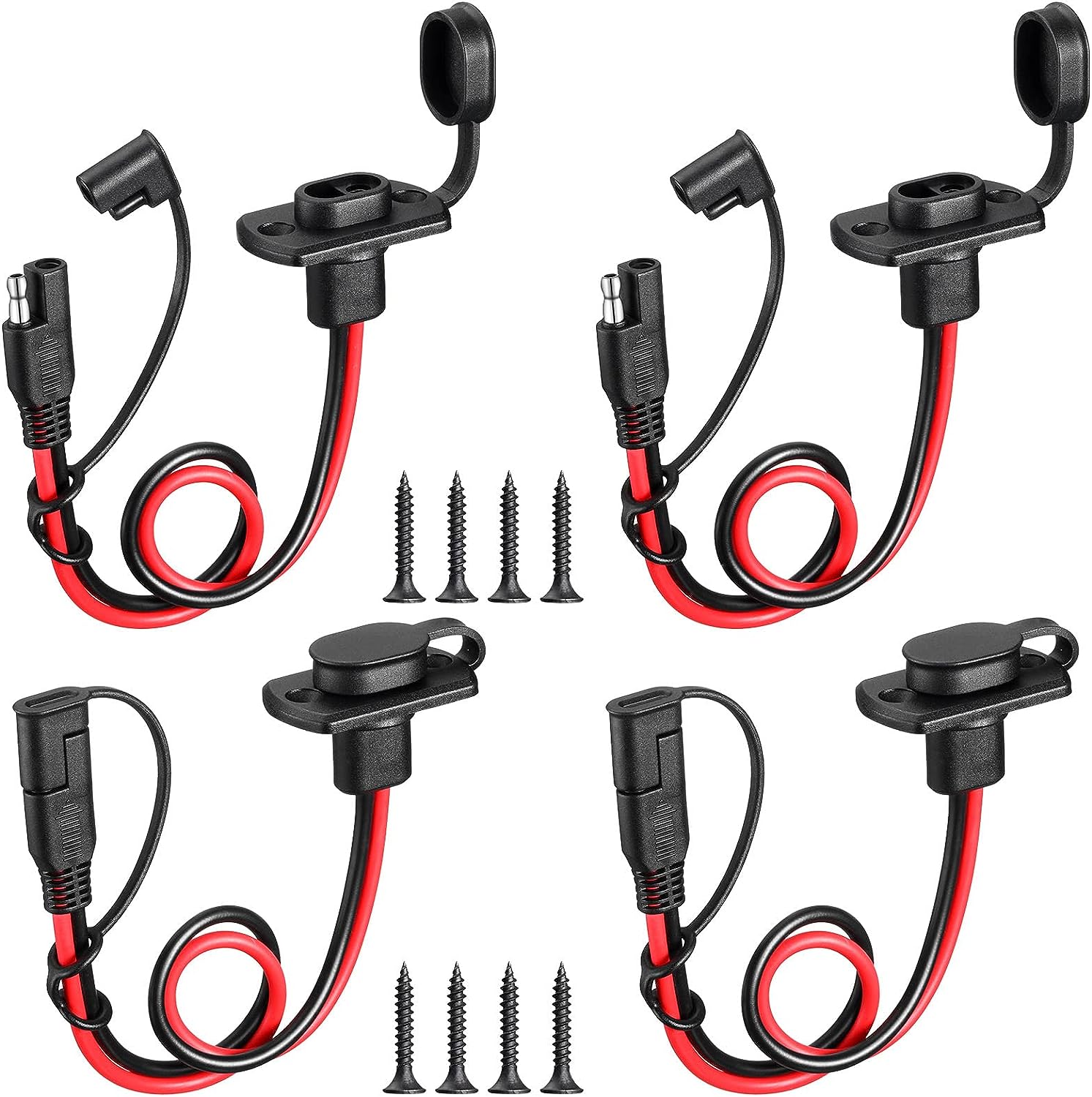 Features: Convenient to carry: The suitable size of SAE solar universal cable connectors allows you to carry them around, which offers you much convenience and makes your life more smoother. Ideal gifts: SAE quick connect wire connector is...

Any one keep up to date on new led tech?
My new Tomberlin uses a two wire led tail light for all three functions.

I just dealt with LED tail lights when the wiring was ripped out by the tires( wires ziptied over the tires ). One side I could see the colors very good, there were 3 wires( gnd, Brake/Turn, running ) but the other side I couldn’t and I had swapped the running and Brake/turn. Consequently when the headlights were on the 2nd side was way brighter than the 1st and the turn signal didn’t do anything on the 2nd side.

So how they seem to work is a low current mode/ half brightness when the running light signal is powered but when the brake or turn signal voltage is applied to the other pin, it must bipass a current or voltage limiting circuit and provide full 12V to the LEDs. There are not 2 sents of LEDs lighting up, it’s all the same LEDs for running lights and brake/turn signals.

A 2 wire system would have to have this type of low power vs high power control at the front of the vehicle where the brakes, turn and running light modes can be monitored and appropriate signal fed to the LEDs/Lights at the end of the 2 wires.

No ground just two wires to magic box.
I was just wondering if this is the new standard. Makes sense.

Why not just leave head lights on all the time? They draw so little power compared to what the motor uses it would have very little effect on range.

Why not just leave head lights on all the time?

That’s actually not a bad thought.
But what I think Garthhh wants is just having all the little globes on the car light up at night.
Having that extra filament in there doing nothing is just tweaking at his OCD

I want headlights & running lights, since there really aren’t side markers.
The present socket has a tiny rubber plug where the 3rd wire would go, but only two contacts.
The oem socket is probably some Chrysler part
The present bulb is a double filament incandescent bulb
I wouldn’t add a switch, just wire the running lights to the beacon

The front turn signals are from Peterson. The oval rears on your stake bed are Grote. Headlights are some twin beam driving / fog light I forget the manufacturer of.

I replaced the headlights with LED fog/driving lights that are knock offs of the square rigid brand, since they only have one mode, I wired them in to low and high beam, and also sent high beam to a second set of lights on the bumper. If you wanted to, one could wire them to the high-beam circuit and leave the low-beam wire disconnected so in the low beam position, it would be just the marker lights.

I stuck these LED lamps in the front turn signals on my '10 and because of the “cylinder” of LEDs, the amber light housing will glow and visibility from the sides is leaps and bounds over what it was with the incandescent lamp. 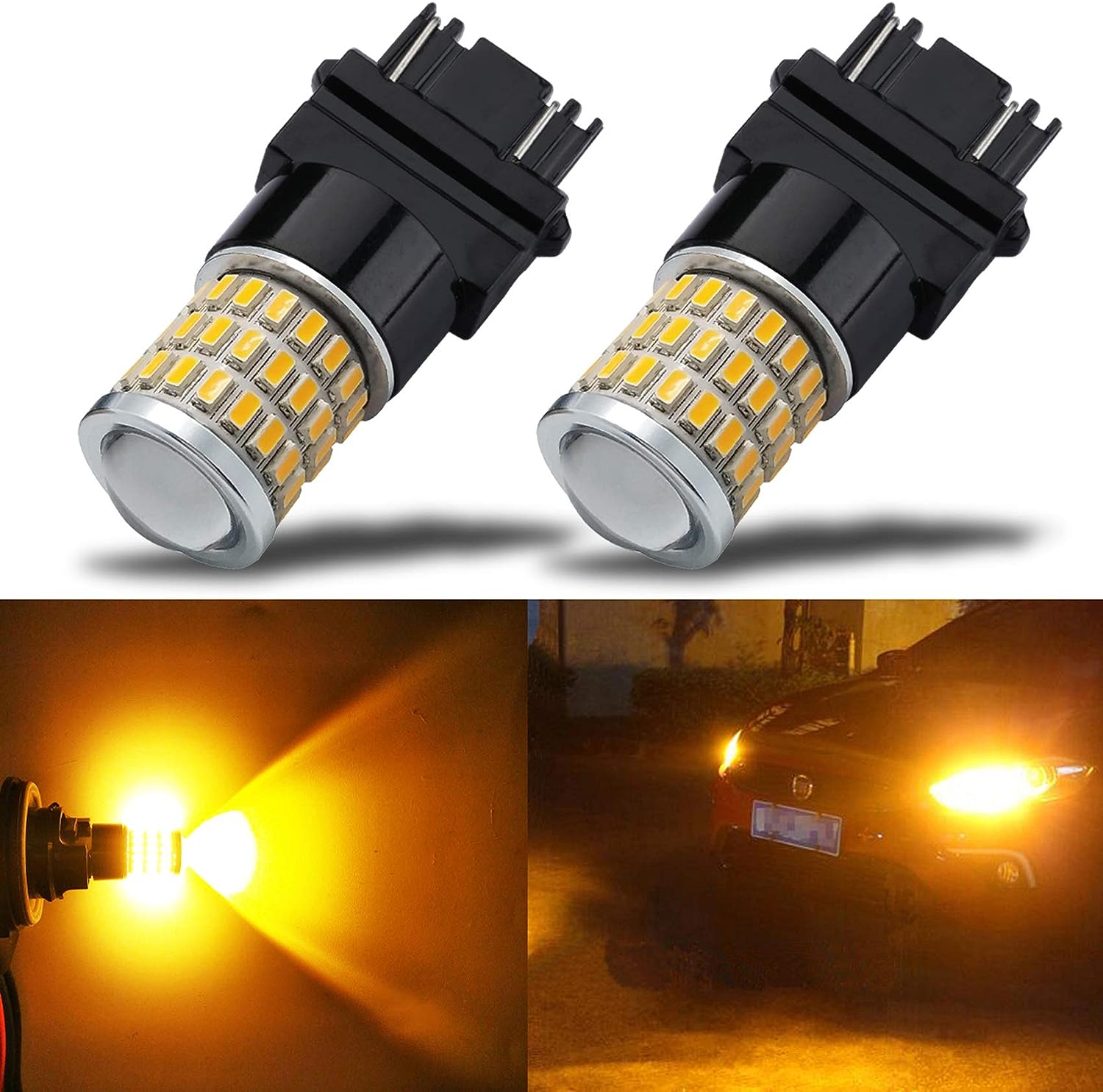 This bulb is compatible for both CK/SRCK and standard socket with Non-polarity design. Best value in the market! Features Dual Brightness: The Dim mode is Tail lights or DRL, while the Bright mode is Brake lights or Turn Signal lights. High...

As for the oval tail lights, there is backup light power already wired into the harness, you just need to put a connector on it and run a wire to the lights. I stuck these in the '10 eL, backup light isn’t super bright but it does the job. The red high/low is plenty bright though. 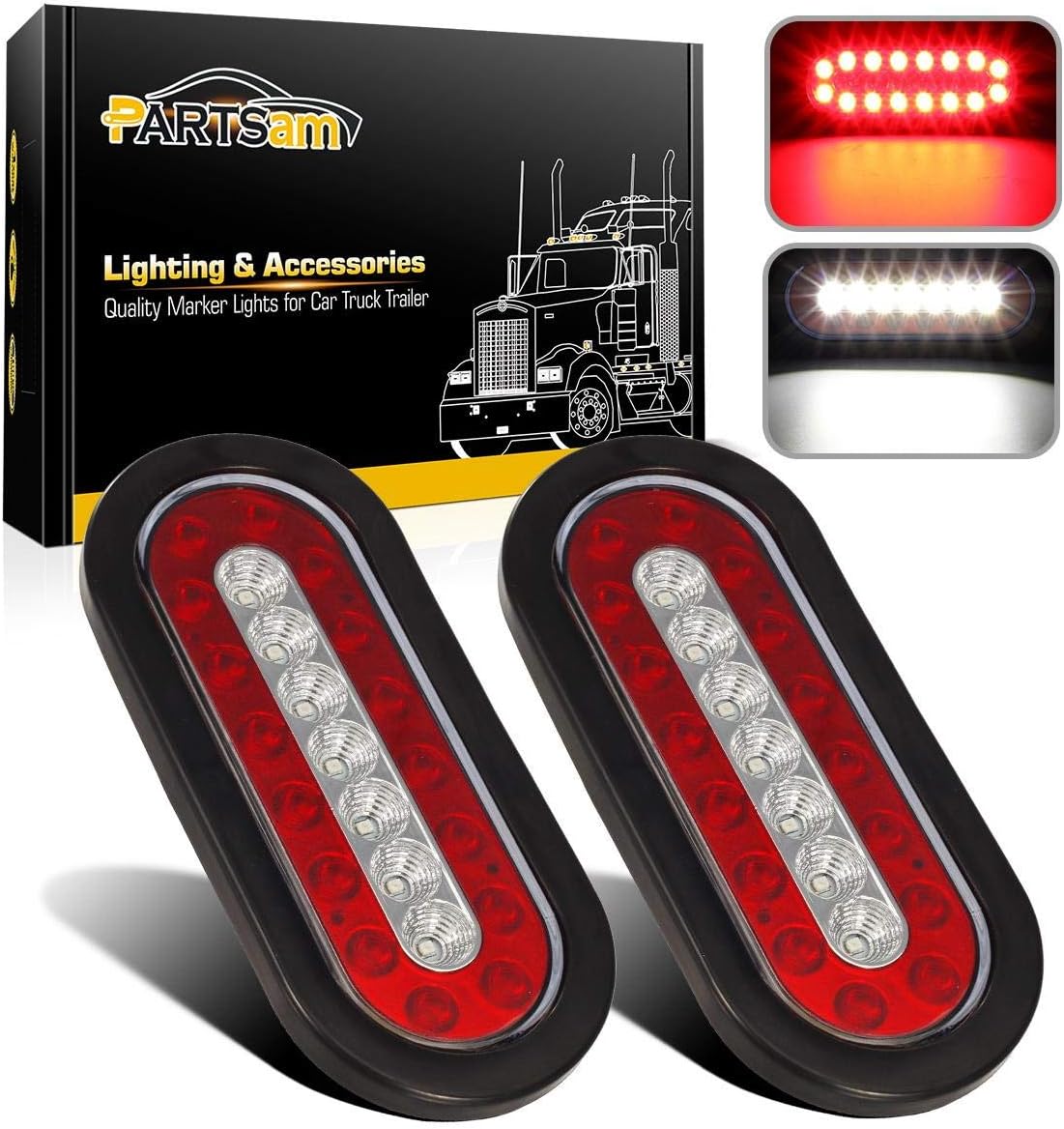 If you don’t care about reverse lights and just want really good running/stop-turn, then these Grote lights are super bright. I have these on my '15 eM.

Yes to day time running lights
I notice that if I leave the headlights on & turn off the key, after a couple of minutes there is a loud beep before everything shuts off

I have led direct replacements for the headlights on the way
I’m more interested being seen, than lighting my way
Being in the city the roads aren’t dark at night

jrjava, how do I get the corncob turn signal bulbs to do both?

I’ll mess with the back after I’ve cleared dmv
There will be some rear facing forklift seats seats on yet to be determined risers, whatever keeps the seats below the window when empty
NV still allow unrestrained passengers in the back, but seat belts & grab bars comfort the passengers 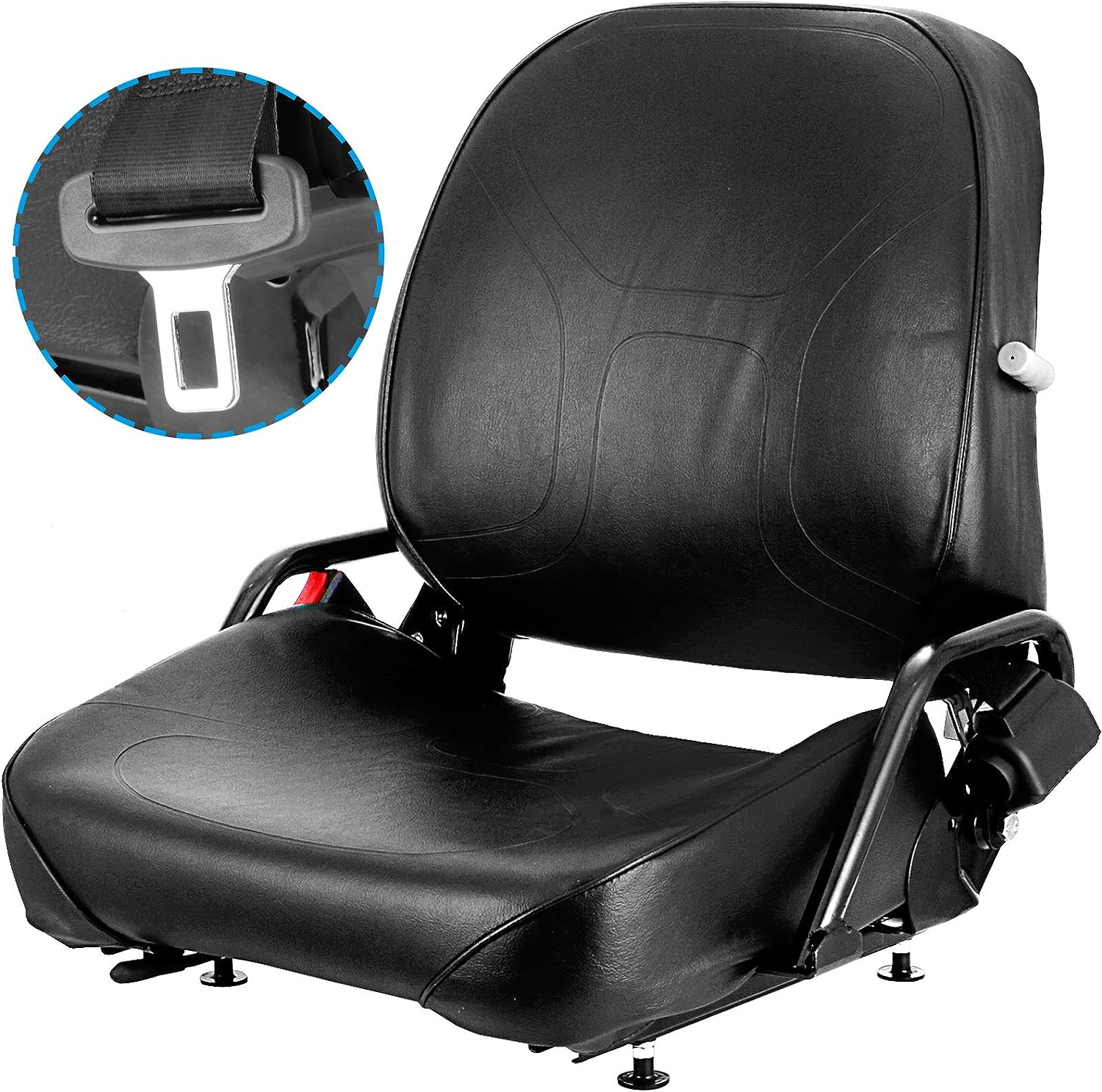 Yes to day time running lights
I notice that if I leave the headlights on & turn off the key, after a couple of minutes there is a loud beep before everything shuts off

That’s in the PSDM circuitry. I don’t think it’s adjustable.

I’m not sure if there is a way to trick it or not.

jrjava, how do I get the corncob turn signal bulbs to do both?