I think these were added by the previous owners as they don’t show up in the service manual or in the parts book. Can anyone confirm? From a 2002 e825 Longbed.

Unfortunately, they don’t have enough adjustment to overcome the negative angle caused by the collapsed shock bushings, but it will be interesting to see how they work once I source new bushings. 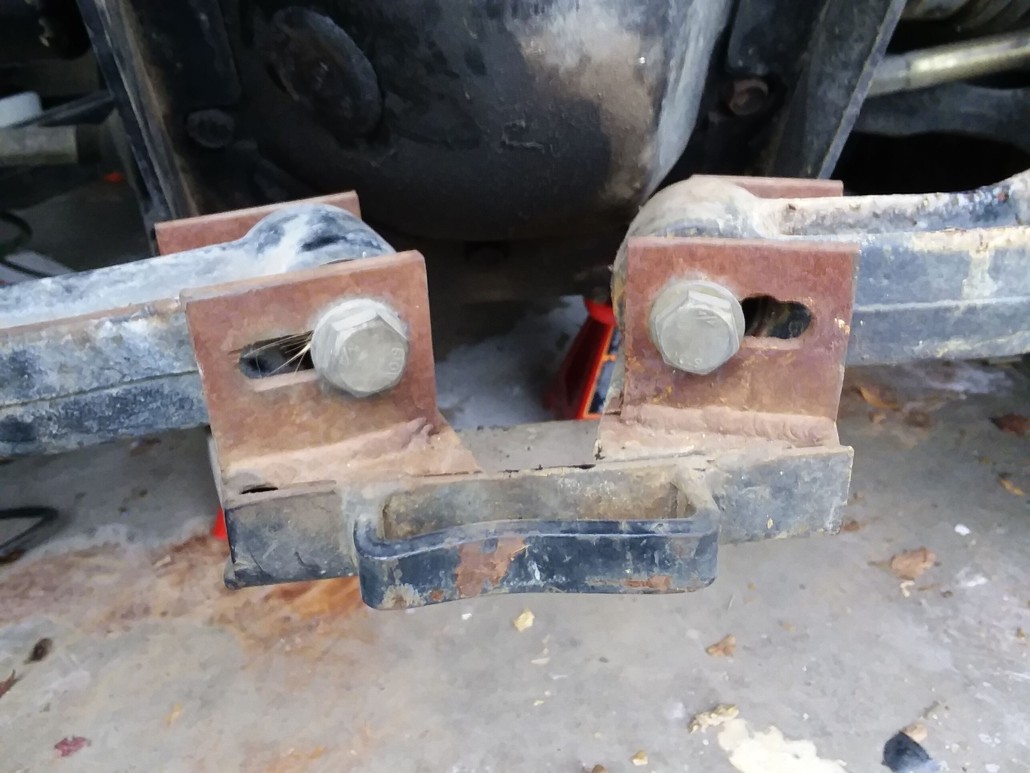 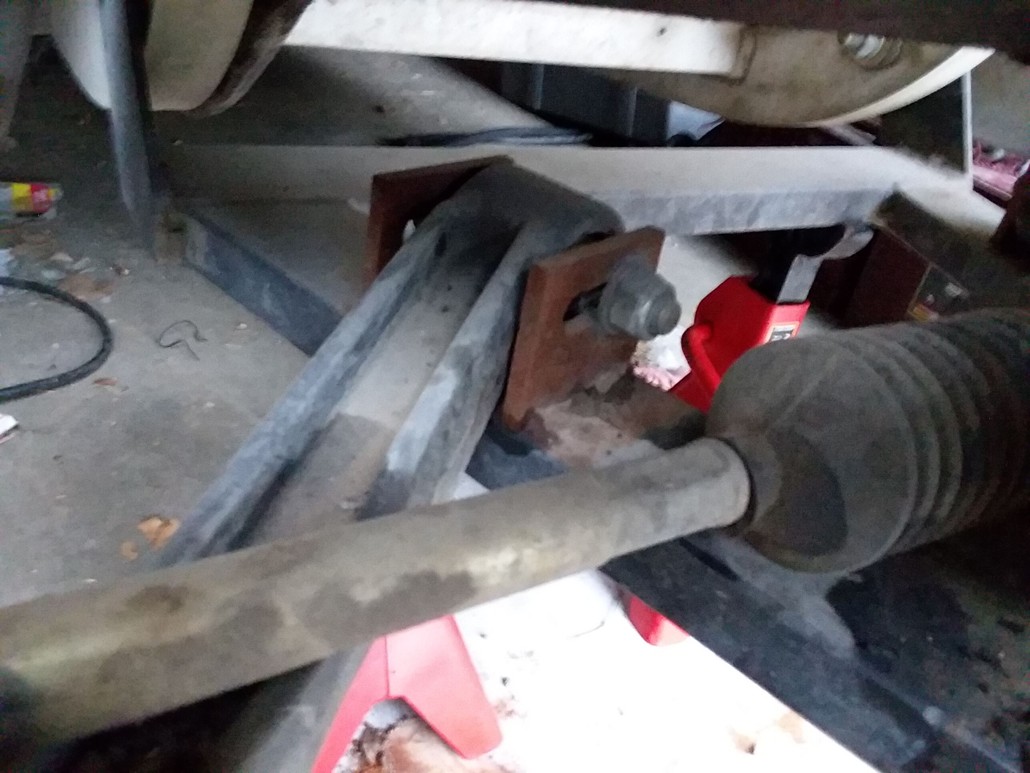 Wow! That’s one way of doing it. I would think the car would have a hard time holding adjustment with all that weight that’s supposed to be held on 1 Bolt. But who knows does it hold adjustment?

Typically what people do to adjust camber on older gem front ends is add washers to the hubs. I’ll see if I can find a thread with pics that explains it

Before [image] After [image] 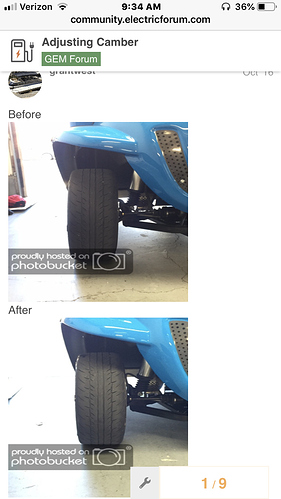 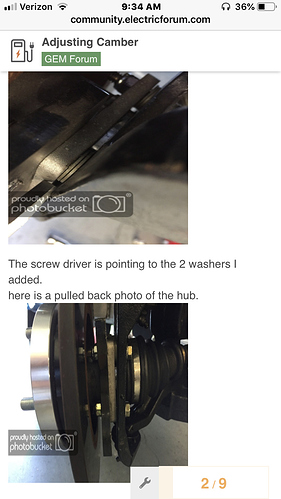 Yeah, I don’t disagree. I saw your older thread on shims a while back, and that’s the way I would have done it, I can’t imagine that the alignment goes out on these that often or rapidly that they need that much adjustment. This vehicle was previously operated by the mechanics at a bus maintenance yard, so maybe that has something to do with the way they approached things.

I’ll have to get back to you in a few months on how well it holds, I’m still getting this one back up and running - hoping to have it sorted out by the weekend sometime.

@jrjava, can I ask where you sourced the front shock bushings? Mine are in serious need of replacing. Thx. 2002 e825.

Apologies for the confusion @dougl, I could have made that part of the post a bit more clear. I’m still trying to figure out where to source new bushings.

Just to give you a Idea what your looking at above.

The HUB is the silver aluminum square in the pic above. It’s bolted to the spindle that’s (Black) with 4 grade 8 bolts. What you do is get 2 longer bolts for top. You add washers between the Hub and the spindle. The amount of washers depends on how much camber your trying to correct.

You may be able to just get 2 new shocks for the front and be done with it. Or you can add the washers, it’s a cheeper option but it’s gonna take you a few hrs to get it all dialed in and your shocks are still gonna be the way they are. I think you can get 2 new adjustable shocks from NEV acessories for $250 and then your only gonna spend 15 mins putting on the new shocks and your done. I guess it’s all what you wanna put into it.

True, true. Although, washers, at least for me, seem to have a lot of variations in thickness, I’d go with machined spacers. Stores call them different things, but machine spacers / bushings go for about a buck-2.98 vs 7 cents.

Got a question for you, Grant, if you don’t mind me asking. How are the high pressure nylon busing inserts that you posted about getting from Rodney a few years ago holding up? I have a friend with CNC equipment, if the off-the-shelf bushing search for the shock eyes busts, I might go that route. I’d appreciate hearing your long term review/thoughts on them, in particular the base material and how it is holding up, especially considering you seem to put a lot of miles on your GEMs.

I ended up buying new shocks from NEVaccessories for the front while I get the bushing issues sorted out. Glad I did, the old front shocks were pretty well buggered.

So, by adding the monkey adjustments, they managed to ram the top of the spring collet on the shocks into the mounts, I didn’t notice how much it was bending the unit until I put the new ones on with their yellow springs and the contrast allowed me to see how much it was tweaked.

So, rather than risk a stress crack down the road by radiusing out the aluminum shock top mount, I just moved the camber “adjusters” to the full outboard position so the shocks would clear. Whomever put these monkey adjusters on was an outstandingly good fabricator. These things are freehand plasma cut and MIG’d in and there was only 0.020" variance in the outboard stops on these and they are basically perfectly squared up.

So, moral of the story here, anyone thinking about adding camber adjustments to an older GEM, don’t do it this way, unless you have a pile of spare shocks lying around, do it @grantwest 's way with the washers or machine spacer bushings.

I thought the same thing about the previous owners mods. Typically I have seen hyme joints in the A-Arm and the frame has a solid mount and makes for a much cleaner and solid camber adjustment. (Photo Below) of some A Arms That have the camber adjustment. 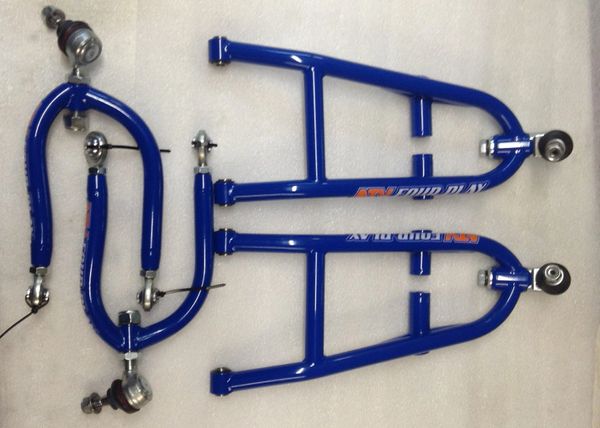