Look what just landed in my driveway

picked it up from a dealer in st Louis. Bad part is that it was probably outside more than I would have liked and there are some issues to work through. Plus side, since I’m the first owner, warranty started when I bought it so I shipped it off to the local dealer to fix all the little stuff under the warranty 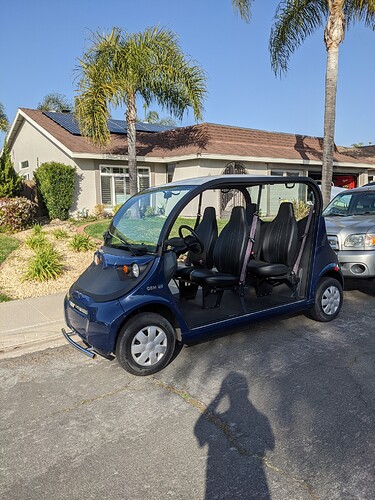 I’m upgrading a 2000 4 seater that I probably dumped way more money into it than I should have. The proof of concept worked and that we found we loved having a GEM and would for the long term. Now it’s time to go all out and build my 10 year GEM.

Couple of requirements for my usage

Right now the thing is stock… so the question is, what should I do with it? Performance first…then I’ll mess with cosmetics.

Will be somewhat of a slow thread as I promised the wife I’d get my old one sold and a couple of other project GEMs/golf cart out of the garage before messing with the new one. No reason I can’t start planning it out and sourcing parts right??

I’m in the same boat. @Inwo, @MikeKC and @grantwest were very helpful.
I went to 25s Tesla battery but I needs some mods to make it fit so I would definitely try the Model 3 one Daves has. (Connecting the BMS to the Tesla battery is the hardest part)

8kw and Sevcon are the way to go.

Charger. It could be DeltaQ (the most used here) but I went to a 29amps charger (to be able to take advantage of the fast charging.

BMS I personally use Daly brand but the best one is Orion IMO.

Sounds like you are headed down the correct path.

As @djgabriel2004 said if you can get a Tesla battery you will not regret it. I think @Inwo might have one cut in half already that “should” fit in the battery compartment, otherwise you can do what I did and just cut a 12" x 3" hold in the back firewall and slide the battery in whole. You can cover the part of the battery that is in the passenger area, or just paint it black. It does not interfere with the passengers at all, you don’t really even know it is there.
I estimate that I can get ~70 to ~90 miles on a charge based on my consumption over several 10 and 15 miles runs.

Gearbox - that is a tricky one.
I have a 12.1 gearbox from Rodney, it works great and I can run about ~48mph. It is just like the factory gearboxes in that is is loud, but not that bad if you rubber mount it (that makes a BIG difference) This is for sale is you are interested, PM me.
Currently I have a beta gearbox from Rodney, it is a 10:35 GEM classic gearbox modified to mount up in a 16+ GEM and new halfshafts. This runs much quieter and on a flat will get you over 50mph but if you have lots of hills as you describe the 12.1 might be a better choice. The one currently in your car is 17.1.

Charger: Your choice, I am using a DQ and am not familiar with the Chinese ones, they might be just fine.

BMS: Again lots of choices the one @djgabriel2004 is really nice is that it has fans and is water proof.

All the above assumes 8kw motor and AC conversion. This can be done on your stock car but @grantwest and @Inwo will have to walk you thru modifying the stock wiring. Mine is completely custom wired. You will have to drill an 8kw motor coupling to fit on the gearbox, not hard just a little nerve racking.

All that being said, say goodbye to the warranty once you start digging in… LOL

Congratulations and happy to help anyway I can.

You will never have 2 much battery so get one that’s way bigger then you Think you will need. If you set your car up right you will end up driving it further and further then you thought, cause you don’t have “Range Fear” a J1172 plug would be something you should think about. That way if you do go to the beach 20+ miles away you can charge up while at the beach at a public charge station and have zero issues making it home OR get the Mega battery and don’t worry about it. That means One of Dave’s Big J1172 chargers. Makes the delta q look like a trickle charger.

I have found the Chargery BMS to be reliable if you don’t make mistakes of (sparks) setting it up. It has no fail safes. If you hook it up wrong in any way Boom, ur done. It goes in a box back to Dave to get fixed. Dave does a great job a supporting the Chargery hopefully you bought it from him.

What did you end up paying for your car delivered?

Chargery and I have gone our separate ways.
Now that there is a 450a smart bms with LCD, there is no reason not to use a full bms, and run all power through it.
The 300a version tripped only rarely, so I’m quite confident in 450a model.
It makes it so easy to connect multiple chargers as everything goes through an internal mosfet switch.
Kills power completely if battery gets low (or high). Even the parasitic loads, like dc converter. No worries about leaving the key on for a month or overcharging with wrong charger.

You guys are the best. Thank you for all the responses!

Here’s where I think I landed

Wiring - hoping I can get some pointers from the folks that have done this in the 2016+s when I dive into it.

@grantwest thanks for the shipping connection. Final price was 1K St. Louis to San Diego. A little bit higher than what I had in mind but he’s a trusted source, wasn’t completely out of the ballpark, and I never got any good bids on Uship.

When he backed it down the ramp to the trailer and hit the brakes, all I heard was water sloshing. Frame is full of water like your other post described. Asked the local dealer if this was a known issue and if Polaris had a procedure to fix, he said no. Ended up sending him your YouTube video and that’s how they’re going to resolve. Figured might as well try to take advantage of the warranty before I void it

Regarding Chargery - My issues have primarily been with the balancing.

BMS#1 - v1.x model would pull down on the first 16 cells and was never able to balance out the pack. Jason offered to upgrade me to v3 for a couple hundred bucks so I took him up on it. (Oh, this one I did blow up with a wiring issue and Dave ended up fixing for me)

BMS#2 - v3 never was able to balance either. Over time, cells just drifted further and further apart. I finally decided to balance out the packs manually, charging each individual cell to the same level and confirming with a multimeter. When I plugged the BMS back in, showed about a 150mv variance between the cells which was just an incorrect reading. I ended up turning off balancing all together and basically used it for charger control and SOC monitoring when driving it… that fixed my issue and the pack stayed balanced (according to a multimeter, not the BMS). 11 months into having it, it just completely died one night in the garage. Emailed Jason to get it fixed under warranty, mailed it back, and it was lost in China customs… never to be found.

BMS #3 - v4. Plugged that in and all the cells read accurately. It ACTUALLY balances down to 8mV delta. I dunno if my issues with the earlier ones were hardware vs software.

In the end, I spent probably $900 and went through 3 BMS-es to make it work so I probably would have been better off going with one of the high-end ones @djgabriel2004 mentioned. I just look at it as a learning journey.

Alright! I’m pumped. Think I have a plan. Now I just have to get my hands on all the parts I need and clear the back-log of projects in the garage so I can dive in!

If you think of anything else that I might have missed or should consider, let me know. Will keep this thread updated as I make progress.

Your factory DQ charger is also your DC/DC converter. You might want to leave that in place and add an option to add a second charger. That way you can use one or two depending on your needs and still use the factory source for 12v power.

I thought that the newest Chargery had all the issues fixed. The more I learn tells me it’s just bad design.
Calibration outside the factory is possible but takes 2 24s batteries for reference, and a days work.

I’m still using my first smart bms that was $350 5 years ago. Plugged it into a dead short (twice) and came back unscathed.
Now that they are bigger, better, and include lcd, consider them disposable. A big learning curve initially, but anyone who has used a bms previous will have few issues.
I’m disappointed that the new design uses other than JST-XH plugs. My Volt harness no longer fits.

Biggest issue for me is BlueTooth. Just it’s nature, I believe. The issue seems to be having multiple bms running at the same time, everything needs resets to re-pair. (might be just me).

For unmatched batteries, use the new JK active balance bms. Not big enough to run the load through it yet. So no LVC unless hacked. Some prefer that battery or bms issues, do NOT stall the car, which can be dangerous in traffic.
Uses JST-XH compatible with my Volt harness.

Factory charger is one of those items on my fix-it list for the dealer. Trips the GFI whenever I plug it in. I also have bunch of 12v things not working like the dome lights and the yellow roof flasher (which I ended up removing)… wonder if it’s charger related. I didn’t do a ton of investigation - just made a list, shipped it offer to the dealer to see what they’d warranty. Worst case they say not covered and then I’ll dive into it.

The charger - I’ll probably do the 72v DQ DCI that Dave mentioned and do a full on-board charger swap.

Check if the Dome light switch cables are connected. 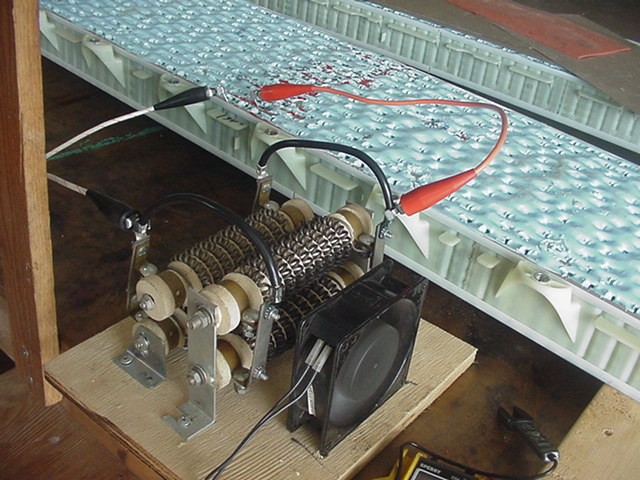 ps.
Actually this is step 2. First is to find and mark the 46 cells that will give their lives for the project.

Looks like you could set up a couple of Brats on that thing and get some lunch out of the effort
.

Congrats I love mine!!! Do want to see what you do on the batteries to get more of a range on them. 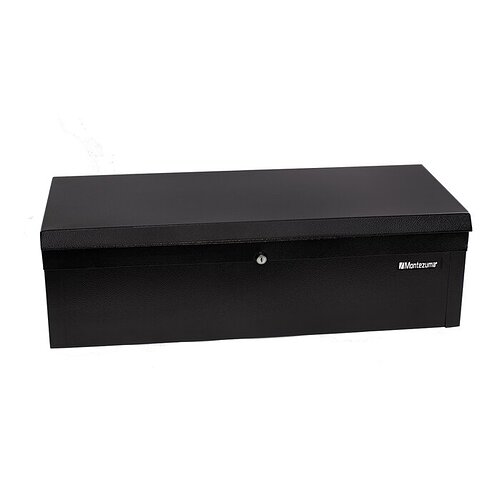 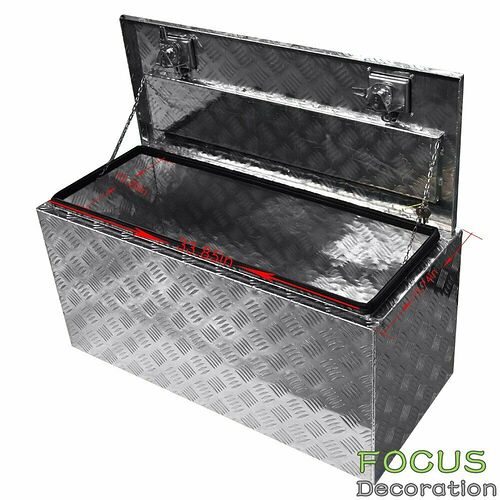 Ooo… that’s nice. I just need to get the car back so I can start measuring.

Pelican case? I put in the dimensions and this is the model they came back with.

Here are the measurements -
Front to back is shorter due the the back window protruding out some - Second picture is from the window to the edge. 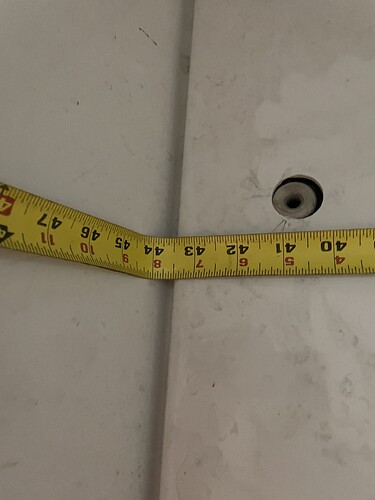 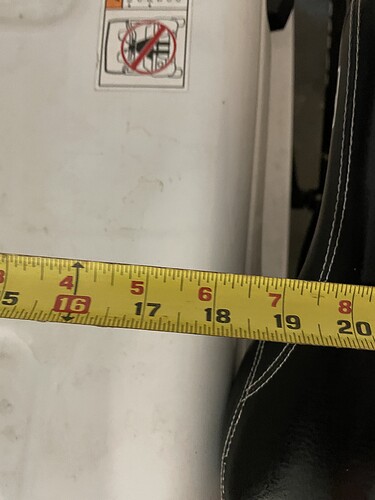 @MikeKC any chance you can check to see if there’s 36" between the rear shocks?

The whole opening is 36”
Space between the shocks is 34” 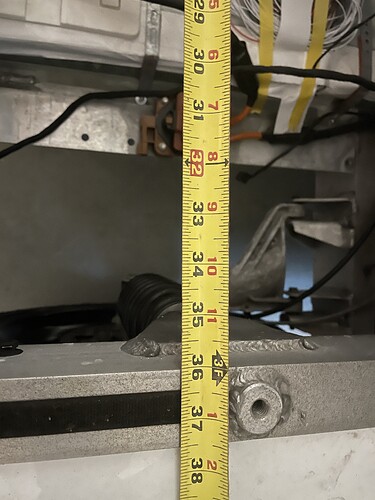 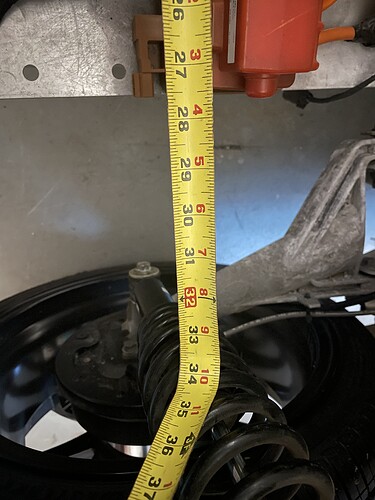 Can’t squeeze this one between the shocks. It’s 35 inches long without a box.
It can stand on edge if it helps. 7 wide and 13 tall then.