INWO suggested I post on the open forum to see if anyone has some insight. Following is a copy of our correspondence which describes the issue

Attn INWO. I just received and installed the magic magnet I ordered from you for my stock 2015 Gem E2.
My Gem still runs at a maximum speed of 25 mph per my gps speedometer however the cart speedo does only show the reduced speed of 1/2 normal so I assume the MM has had an effect.
Due to sticking brushes I just had the brushes and holders replaced and the commutator turned and the card ran at its usual 25 mph following that. This was done by an electrical shop. The motor is the stock 7 HP, batteries are one year old gell, the charger is set to the gell algorithium, and 14" rim/tires are installed.
I was expecting a speed increase of perhaps 5 to 10 mph based on what I had previously read on the forum. Is there something I’m missing or a setting that needs to be changed? I recall reading something once about setting dip switches, does this need be done.
Asking for your help to gain the desired speed.
Thanks

The device removes the limit. Any speed increase is because the battery motor combination is able to power the car faster. If it does not, something is not up to specs. The 7hp motor is capable of 35mph, so it must be battery issue. IMO

My pack voltage measured at the controller with ignition on reads 78.9 volts. I ran the speed test after just coming off the charger so assume I had full voltage. Is 78.9 volts not high enough??

Should be ok. Unless it drops under load.
Results vary. You might ask in open forum. You can return it if you want, but removing the limit is the first step to more speed.

I just returned from a 4 mile run with a couple of steep hills and the pack voltage measured 75,4 volts. It appears the motor and batteries are ok and should be capable of 30/35 mph. I checked the dip switches and 1&3 were on - as it should be,
I’m at a loss.
Thanks for any help

This is when the pack is at rest? no load?
Try testing the voltage under a load, hold the brake (hard) and press the gas while you are measuring the pack voltage. Does it drop low?

What Mike said ^^^
He hit return key faster than I did.

Or/ in addition…
Stick your meter leads on your pack (first and last battery) for a reading there and take it for a run (see how low it drops).
Then stick your leads on the controller (tape your meter to your windshield for a poor man Head’s up display) and run your car through the same loop around the block.

Report back with your findings.

couple of steep hills and the pack

Certainly down hill car hits 35 mph?
Switch speedometer to kph to read 0 to 40.
In mph setting speed reads 25/40 of actual. Reading of 25=40 mph.
@LithiumGods knows about the 7hp. And newer classics.

I’ve just done a test run to check voltage drop under load. At a sustained 25 mph on flat land I’m getting only 70.4 volts at the controller leads to the motor. Clearly not enough for increased speeds.
As the gell batteries are only 1.5. Years pls I suspect I’ve been guilty of not sufficiently discharging them before recharging. Most use only involves short runs of 5 miles or less and usually one bar on the meter, when I’ve plugged in the charger the dash shows less than 20% discharge. I need to read up on proper battery usage and try to rehabilitate these if possible. Wonder if the plates have become sulfated? Perhaps even add a 7th battery if necessary.

But you forgot the other half of this test. If you do this at the battery end(first and last batteries in the loop) and you do not see this drop it may just be a dirty or loose connection.

If you DO see the same drop (down to 70v) but it comes right back up again fairly fast, look for a bad connection on the batteries.

If V comes up slowly or not at all then probe each battery to see if one is bringing down the whole pack. It should be obvious.

For the record, These batteries do not need to be fully discharged before recharging again.

OK. Thanks. I’ll do that Monday as I’m gone for the rest of the day

Hmmm. I have a 2015 also and performs at 32 on flat ground with 2019 Polaris stock Gel cells and just installed a MM yesterday. Following…

That’s exactly what I was expecting! Thanks for the input. I’m working on it.

This is a parallel story that seems to back up what you are going through.

Yesterday, I hooked up with a local Gem neighbor. He has a 02 4 seat car running Gels. I brought my MM over to see what his car would do. I was surprised that it make NO improvement. Top speed on this car was only 24 but he said it would do 26mph fresh off charge.

With a little bit of backstory I learned his Gel cells were a couple of years old but they had a real rough life. Previous owner put the car in storage and let them go almost flat out dead. These batteries were slowly nursed back up to their present condition and they seem to have enough range capacity (for how he is using the car) but a brake stand test revealed they all drop to 11.6 ~11.7. That makes for 70.2 at best under load. Interesting that these batteries would come right back up to 12.7 when off test. Like yours, the low voltage under load is killing top speed and accel.

Next- I’m going to take one of my old Gels over and quickly throw it in the loop and show him what a little bit of extra voltage will do. Short term test can sit the extra battery the rear foot well. If he likes, I can rig it up to live in the empty space under the front seats.

Long term- I’m also feeling him out as a possible Lithium candidate. The extra battery may just tide him over until the new packs come in.

Interesting. My gels are Deka 8g31dt and are 1 1/2 yrs old. Always plugged into charger set for gell. Never allowed to discharge, always plugged in right after using the Gem. Maybe I’ve got a bad battery in the mix. Will check each individually after test runs. 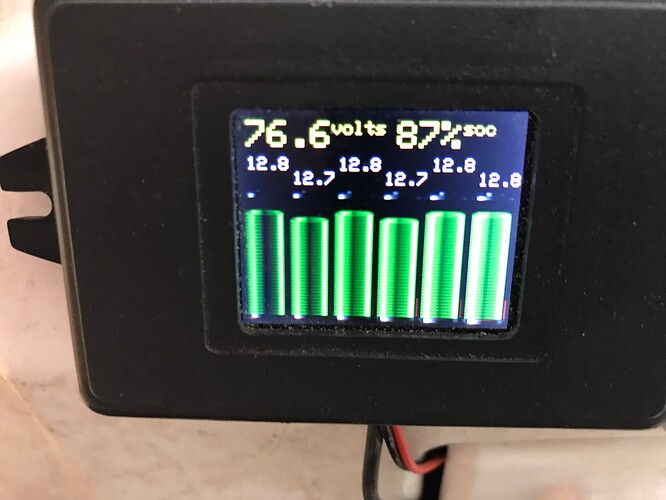 image1920×1440 133 KB
I found an old BattSix monitor I had on my previous Gen (forgot I had it) and this was the first reading after installation. The gem had been off charge for two days following a 3 mile run. I’m charging it now and will run some tests at various speeds and will see what the results are. This will continually report each battery voltage and pack voltage so can indicate if one or more batteries are weak or failing.
AssyRequired April 1, 2022, 10:05pm #14

Those things are pretty cool. I never understood why that guy hasn’t sold hundreds of those.

Got a call from the local Gem dealer today. He installed a mm and the gem only picked up 1 mph, he was at a lose. Batteries are 2 months old and fully charged. Have heard a few people experiencing the same problem decided it was time to investigate. Hoped on my tricycle and pedaled over. 2006 E4. everything appeared original, 5hp motor, hub cap wheels. Gem accelerated normally but just ran out of oomph at 25. But it was not surging hard. This clue lead me to the controller, read the settings and there it was, 2 setting were off. The way it was set it would never have hit higher speed. I have seen this on a few older controllers and some T5’s that were remand by FSIP. Uploaded LG’s custom setting and vroom went the Gem. Pretty sure this is the reason some Gems are not responding to the MM. Hope this helps.
LG

Great information. Wonder if that could be my problem as well?
Now, how can I get my controller checked? And what 2 setting were off?
Thanks loads

FYI. Got this in an email from INWO but was not posted to the forum. Maybe my 2015 controller was programmed this way from the factory. I bought it with 125 miles from a Chevy/Gem dealer for $5000 in 2017 who used it as a demo and let the batteries die.
Doubt the controller was ever removed for anything.

INWO comment
“Anyone with a programmer can set it back to normal. Or send it to Michael to have it done.
Two settings were found to be detuned. Maximum armature current which limits torque.
And field current setting which limits speed/volt.”

@LithiumGods will do it for sure, but I’m sure that he needs at least $150. He is very busy. Any dealer or hobbyist with sentry sw can do it for you. I can set you up DIY for $200. sw link and dongle.

I can do it for you. Can add in more than stock, easily get you into mid 30’s. will also include thermal grease to bind it to gem frame for additional controller cooling. FYI they fit in the medium usps priority box $16

Attn Lithium God
This gets more weird. I just took photo of the T5. It appears it was re-manufactured, unless this is what they looked like new? I’d be happy to have you reprogram this to get me to the mid 30s. I assume then I’d no longer have a use for the magic magnet? Should I sell it or?
Please let me know the reprogramming charge, where to send it, how much to insure it for in case USPS loses it. I can enclose a check covering the cost and return shipping or pay you via PayPal.
Thanks for your help
Mike
﻿ 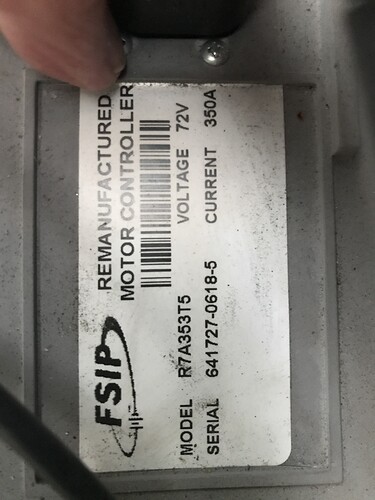