Doing another lithium gem conversion . I Did the first one about 6 years ago with Nissan leaf cells (did a few of these ). Then did one with Lithium Titanate cells and the last one with Inwo’s green Lifepo4 cells . That cart was a 2007 and I had already changed the Deltaq to lithium profiles , so it was an easy install .

Decided to do my personal cart ( 2014 E4 ) that was previously converted to Lithium Titanate . I wanted to start by trying to do a simple drop in install that almost anyone can do , Then Hot rod it further .

So i got 25 cells from Inwo . Configured them in sets of 5 so that they would easily fit in the frame rails . Then charged them and equalized them . Dropped in the 5 sets of 5 and hooked them in series using the stock gem battery wires . Each module weighed about 20 lbs so it was easy work . I also kept the factory inline fuse on the battery pack . Took the gem for a ride and it is fast . The light weight plus higher voltage really brings it alive .

Next was to test the factory larger set to the #14 gel setting . The charger charges the pack to 85.5v then shuts off , perfect . This charges each cell to 3.42 volts which is about 96% soc . They are rated to a max of 3.65v but 3.4v - 3.45 is optimum charge for range and longevity . So This landed up being a very easy install . The hardest part is actually removing the old , heavy lead batteries .

Now i am charging the pack using the different stock profiles to see what the charger will do . If i can get a higher final voltage out of it i will install another cell to make the gem even faster . 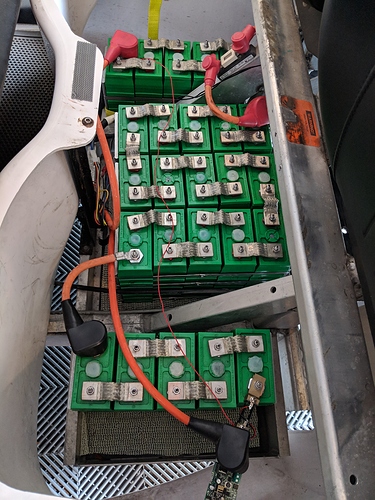 Mike: How are your battery’s heald Down?

I am using rachet straps to secure them , in the back of the picture you can see one of the yellow straps .

The Lifepo4 cells fall back to 3.34v after they are done charging , so the gem will have a 83.5v , fully charged resting voltage . The t5 has a high voltage cutoff about 85.5v so your good there.

After the battery pack settled to its resting voltage i recalibrated the power meter on the dash . When the gem started slowing down it was in the yellow bar , so about perfect .

Hi
if i remember somewhere reading that deltaq #14 gel setting sometimes do a battery equalization charge with high volt over 90-96v but very low amp?
have you see anything about that ?

ok thanks for info and Gem did a Delta-Q Charger Algorithm Software Update May 4, 2007 maybe its different after that

finished testing the Deltaq . Changed the profile to # 13 which is for Trojan flooded . The charger charges to a final voltage of 86.5v but the first cycle actually went to above 90v before i shut it off . After that every charge cycle went to 86.5v . It appears Deltaq does a balance charge on the lead setting .My guess is that it did it the first time and then probably does it after so many charge cycles . The other item to note is when the battery was at 85v and i tries to charge it , the charger errored . A regular lead battery would not have a resting voltage that high so it assumed something was wrong and would not start . After running the gem for a while and lowering voltage , the charger started fine ?

Next set it on # 43 Deka flooded , this charged to 87.5v , so 1v higher then profile #13 . For my 26s pack neither of these profiles would be ideal . So in conclusion , the stock Deltaq shoulf work fine on setting #14 gel . For anyone using a 25s Lifepo4 battery pack . For those wanting to run more cells and higher voltage your probably going to need to add lithium profiles to your charger .

I had already changed the Deltaq to lithium profiles

So, to be clear, your original Delta has programmable profiles? Sorry if I missed this in a previous post

They all have programmable profiles . The stock ones are for gel and flooded batteries . If you want to run agm or Lithium batteries you have to install different profiles in to you charger . Not easy .

Thanks for info-who can change profiles? I want to do a lithium upgrade in the future

Does a person need special equipment to change the profiles? Before retirement, I was a computer programmer and network tech for 30 years - I think I could do it if there were instructions available.

I just acquired 100 headway cells and want to put them in a 24s-4p battery for my 2003 GEM. Anyone done this before? I realize my range won’t be great, but I only need 10 miles for all the trips I make.

Yes. You have to buy a programmer. But you also need to be a dealer to get the lithium software and profiles. Deltaq won’t sell them to a end user . Inwo and I both do it .

I now believe that I have a zivan charger (looking at your spreadsheet). Can those also be re-profiled?