One question. Where does the GREEN wire from my Delta Q 912-7200 connect to on cart. E825. The old charger was not there when i purchased. I was told it was a Zivan. I blindly bought the Delta q figuring it would have appropriate connections. I know its for the interlock

Not used in your gem. Also, green is hot, don’t let it touch another wire.
If you have no relay, jumper the interlock wires and do without.
Or you can buy the appropriate model dq charger from @LithiumGods .

the 7200 is the wrong charger for an early Gem. the 7254 is the correct one. it will communicate with the interlock and can control the led charge light. If you use a 7200 you will have to bypass the safety interlock.

Thanks for the quick response. I was thinking of using a relay to Jumper interlock. I notice that the interlock loop is negative side of circuit. Could i use a relay that is NC and activated when charger is on? The charger is working fine, but i can’t read any voltage at green wire while charger is on. The charger was given to me so that’s why I’m trying to use it. Again thanks for your help. Aloha!

green wire is hot when charger not plugged in. It is pack voltage not 12v. older Gem in Nc on interlock so you could wire in a relay that opens when charging

Guess I would have to find a 72V relay. Until then its wrap the power cord through the steering wheel. There are multiple people that use this cart. That’s why I wanted to use interlock if possible. Again thanks for the advice. Good Stuff!

or maybe you tell them the charge cord must go around the steering wheel 2 times to also charge the display battery. DIY interlock enabled.

I’ve been to facilities / other sites where that is actually a policy for certain types of machinery for that very reason. Example, not all electric scissor lifts have a safety interlock on the charger so the 120V extension cord used for charging has to draped through the side railings near the control console to indicate the machine is on charge.

Ha, I had no idea but sounds like it’s a tested way to do the DIY interlocking.

Yup. It’s way easier and less work than the alternative of taking away the steering wheel when the drums aren’t pounding.

Or just get the correct version of the DeltaQ for an earlier Gem. It costs about the same to get the right one. I understand there are people selling Dq chargers in Ebay saying they are for Gem’s but don’t know they are the wrong version for the Early Gems.

On Firetrucks they use a mechanical disconnect that spits the charger cord out when the truck starts up.

It sounds like an electrical guy got tired of replacing connectors and came up with a better idea.

Had that same issue and this is how I did it. 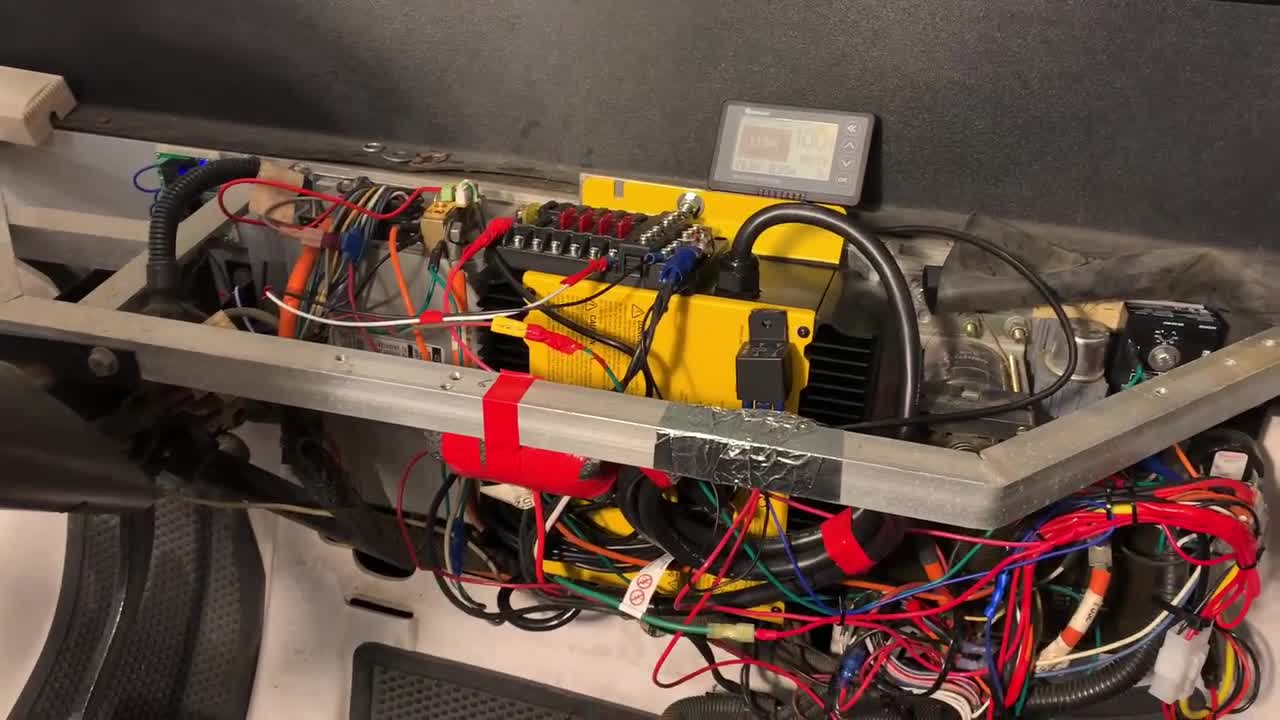 Older Gem car with new DeltaQ charger and how interlock works. This charger does not come with installation instructions and how to connect the interlock wires because this charger is used in some dif