Changed the resilient bumper out, took the car out for a test drive, barking on decel is gone, but there is a growl almost like gear teeth chattering at speeds and the speedo barely registers any speed.

Took the motor off, stood it on the back end to use a pick to pull out the old bumper, put the new one in, greased the splines, reinstalled. Got the grinding at full speed. Came back home, motor seemed overly hot for a 3 block test drive, pulled it all back apart, checked to make sure I didn’t have something out of alignment. Put it back together, ran it on jackstands, same thing: no speedo and at high speeds, get the grinding

Going to order some of the club car bumpers (what NEVAccessories sells) and try that.

Wondering if anyone has seen this before, a wrong size bumper, causing this behavior. I can’t imagine that something got trashed in the motor just from taking it off. Hopefully no damage done from the wrong size one…

Could be. But the chatter/ growling?

The magnet sensor is all external right? It’s just the black cap on the end, any internal parts?

Sounds like there might have been something between the new bumper and the shaft causing it to be too tight. This will overheat the bearing and melt the sensor and crack the magnet. Lots of us have tried shimming that bumper to make it smoother and learned the hard way. If magnet cracked, don’t pay full retail, you can get the parts on ebay for a fraction of the price.

That makes a lot of sense - also explains what Dave meant and I mistook as only being the pickup.

I didn’t see anything in there, but I’ll check better when I pull the motor again. It’s possible, as the motor appeared to have been pulled before - or at least the wiring as someone had marked wire numbers in sharpie by the lugs. Other possibility, is that the new style bumper is too thick for the older motors.

Thanks for the ebay tip, ordered another magnet and pickup from there.

Pull the input shaft. this is a typical symptom of the small bearing on the end of the input shaft being bad. This can cause a catastrophic gearbox failure,
Also check the motor bearing. Note both of these can be caused by shimming the rubber bumper too much or the armature not fully seated in the bearing.

Thanks Rodney. I was just thinking that it might be a good idea to pull the input shaft and replace the bearings & o-ring while I’ve got the motor off. That settles it.

overheat the bearing and melt the sensor and crack the magnet.

Pulled the sensor pickup cap yesterday, the magnet basically fell out and is slightly oval in shape now.

Taking Rodney’s advice and planning on pulling the motor and input shaft this weekend, replace all 3 bearings, the o-ring and the magnet. Unfortunately, it doesn’t look like the new resilliant bumper disk will be here until next week, so the motor won’t be going back in this weekend unless I can find a golf cart shop nearby.

Pull the input shaft. this is a typical symptom of the small bearing on the end of the input shaft being bad. This can cause a catastrophic gearbox failure,
Also check the motor bearing. Note both of these can be caused by shimming the rubber bumper too much or the armature not fully seated in the bearing.

Ripped everything apart again today. Pulled the input shaft from the transmission, like you predicted, the small bearing is shot. Caught it before it came apart, but turning it is really rough, like dragging something across 50 grit sand paper.

Now that I have it out, I can see that the input teeth are pretty well clapped out too. This one is done.

Thanks Rodney. I was debating about maybe pulling the input shaft anyway to inspect it since I had it all open, but had I not, I would have possibly lost the whole gearbox. Really appreciate the advice. I owe you a 6-pack or something…

Motor bearing I would have checked since I was planning on pulling the motor apart for other reasons, or should I say suspicions. (coming soon to thread near you). 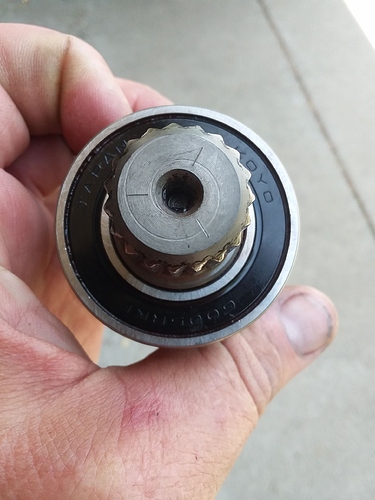 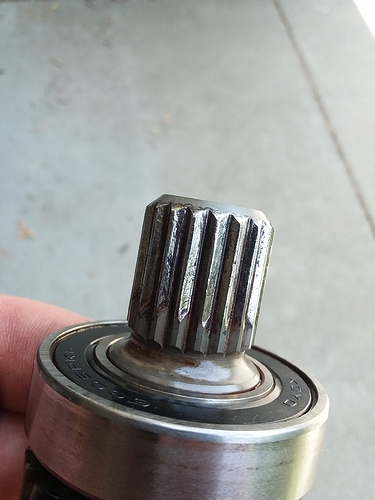 Had a bad feeling about the motor too.

When I had the motor off the other day to change the bumper that lead to all of this, I noticed one of the field lugs felt “soft”. Someone had also marked the motor with wire numbers, so they had it off at some point. Now that I had it open, I see where I don’t think they realized why the jam nut exists on the lug.

It’s to prevent this from happening… 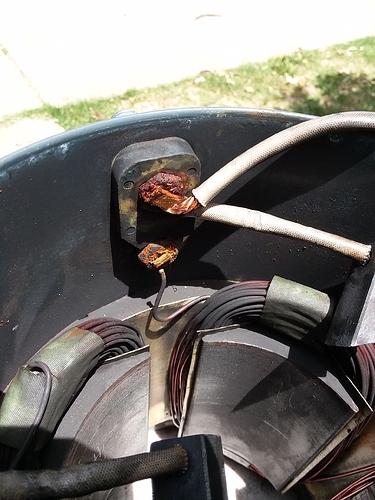 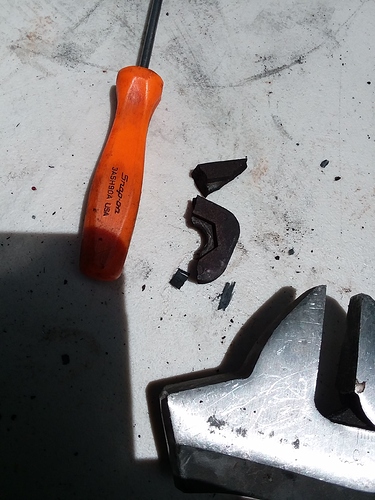 They rotated the bolt and since the insulator isn’t designed to be a nut, it broke and the field winding connections was just barely hanging in there due to being stressed out from the stud bolt being twisted around. Snapped off when I probed it.

Not that the previous owners are reading this, but just in case… This is how they are supposed to be tightened/loosened. With a tappet wrench / slim wrench or a ground down chinesium wrench when you can’t find the other ones in your toolbox at that moment…Second wrench keeps force on the jam nut to prevent the stud from rotating… 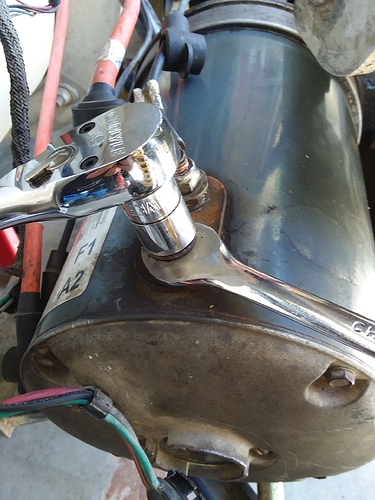 Time to round up a spot welder …

Commutator could also use a few passes on a lathe, some nice grooves in there and it’s worn down a good 1/16 where the brushes ride. 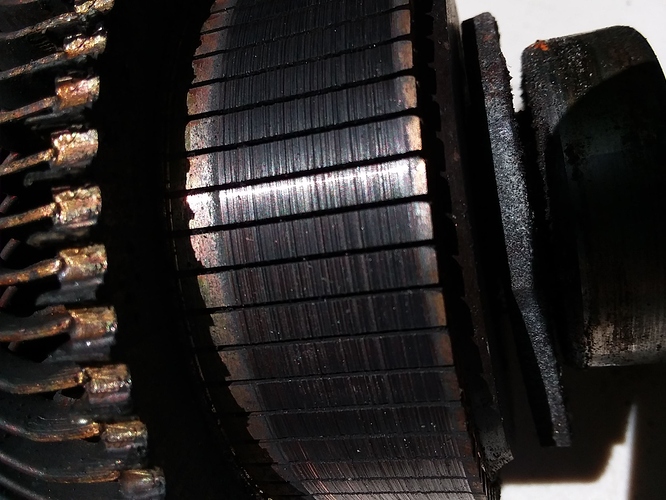 So, warning to anyone who wants to stick a Polaris 5414407 bumper in an old motor, it might not be a good idea. Parts guy said it would fit the classic models in addition to the 2012-2016 ones it was designed for.

I dunno. Could all be coincidental.

The commutator seems to be worn evenly. Clean it up with 220. looking at the input shaft is a good possibility the motor coupling is worn. If it isn’t noisy when you put it back together Hoo Ray you will have another few thousand miles before it gets loud. If it is the coupling or motor will have to be replaced. Be sure to grease the coupling.

How many miles on the cart?

I think it’s 5800, but it could be 6800 miles. The lower left segment of the 1000’s place on the BDI/ODO is a little dodgy - hard to tell if it’s a 5 or 6. I’ve had it for 400 miles of that. It spent the first part of it’s life as a work truck for a bus line at the university. Not sure what they put in the bed, but it’s got some depressions from weight. At one point they might have even used it as CNG fueling truck for the buses.

Don’t recall the coupler looking worn, will take a closer look this afternoon.

After reading about this I feel that I should pull the motor on my 2000 GEM. I have looked in the copy of the service manual and parts manual and could not find any information or part numbers. Where can I find more information about this area of my GEM? I know that I have a 7 1/2 hp replacement motor as it is noted on the controller. Any help would be greatly appeached.

So I am going through a similar problem with my 2013 gem e6. It was vibrating like crazy! So I read online that it might just be the bumper. I put it in with no real change in vibration. So I took the badly worn one and stacked them. It killed the noise but like your problem the motor started to over heat very quickly. I took off the motor again and used two pennies instead to shim it. The vibration was back but much less. However, the over heating was still an issue and only after a mile.

How did you rebuild go? Did you finally solve your issue?

And your speedometer still works?

Mine wasn’t vibration, it was barking a lot on the deceleration. Then, once I tore into it, it turned into a few bearings, motor and input shaft.

For vibration, it could be any number of things. Bearings, shafts, motor, half-shafts…

My motor had other issues, I ended up replacing it with one from R4F. The old motor is sitting in the garage, I just need to finish a few things and put it back together.

I also replaced the input shaft based on @Old_Houseboater ’ suggestion. The old shaft was still serviceable, worn, but serviceable. I could have just pulled the end bearing and replaced it, but I had the opportunity to make an upgrade, so I went with it.

My 02 is running about as well as it can in that department at this time. I might be in for a gearbox rebuild at some point - it has a bit of a "wrong kind of " whine, but I’ll deal with that when it happens

I am having the same issue now. I installed a new bumper and the cart was quiet for a short while, then a new growling noise came back. I took everything apart, the bearings on the shaft and inside the gearbox had no notable play. The bearing inside the back of the motor has some lateral play so I am replacing it. I did notice before when I was putting the motor back on with the new bumper the last few mm’s had some resistance presumably from the new bumper. This is applying notable sideways force on the bearings that were not meant to handle force in that direction. I’m curious if others have noticed this or if I did something wrong? This car is so simple it should be very reliable, it seems the weak link is the motor to gearbox connection.

Did you remove the old bumper?

Yes I did remove the old bumper, is the resistance normal or not? It seemed like way too much.