I have that motor chatter when I let off the accelerator. Bought a new rubber bumper from NEV. Also, I have a “rum, rum, rum” sound at any speed, worse once hot. In addition I have some slight free play at the cv joints. Nothing major. Car seems to drive fine but the noise and slight “hop effect” are bugging me. It’s similar to warped rotors on a car.

I will try and upload a video of this sound I’m describing. It has the whole car “hopping to the sound”. Edit: won’t let me upload.

Has anyone heard this “rum rum rum” sound I am describing. Doesn’t do it under acceleration. More when maintaining speed and the trans isn’t quite under as much load.

Edit. I have the hood off and have inspected everything. CVs are actually in better shape than thought. Slight oil leak (appears to be old, no new oil) from the motor to trans connection where the motor meets input shaft. Will be pulling motor in the new few days. Changing diff oil etc.

Great forum for info. Been eating it up!

Rum rum isn’t only at 25mph is it?
Do you now what plugging sounds like?

I too have a rumble sound when no load is on the tranny and goes away on acceleration/deceleration. I put in the resilient bumper and it went away for about a week and is now back again. I have a 2002 with 4,800 miles and the best guess I can come up with is that there’s been too much play on the input shaft for too long and it side loaded the bearings on the input shaft which now has too much play and wobbles when not loaded.

unfortunately, it’s about $250 for a new input shaft. I’ll be getting a new motor so I’m getting the new shaft too so I will eventually know if this solves the problem.

Would love to hear how you solve this.

It’s at any maintained speed really, the sound is consistent with a slight “hop or vibration” similar to warped brake rotors in a car. Or an out of balance wheel. The “rum, rum” sounds is faster at 25mph than it is at 17mph etc.

I’ll be putting in the motor bumper, and will inspect/take some pics of the input shaft.

Going to go through the whole front end.

If anyone wants the video of the noise sent to them I can send to a phone or email. I think I need more posts to allow uploads.

We have a 2001 e825 with a ride4fun motor that makes a similar rum rum sound when flat out on a downgrade as the speed control governor kicks in. It feels to the driver like an electric car regen braking but that function, I believe, is not on the 2001 model. I have about 5900 miles and replaced the input shaft bushing and motor brushes less than 500 miles ago. A noticeable amount of play was eliminated but seems to be slowly coming back. Driving under 30 seems like not a big issue unless you are a daily driver.

Here are the pics of the motor removal. Looks like the shafts are fine. The seal…not soo much.

Can anyone provide the updated bearing and seal#'S for this. Assuming my shaft is fine since the Teeth look ok.

Also. Why does the input shaft bumper look so different? The old one fits perfect in the motor, the new one just slides in? 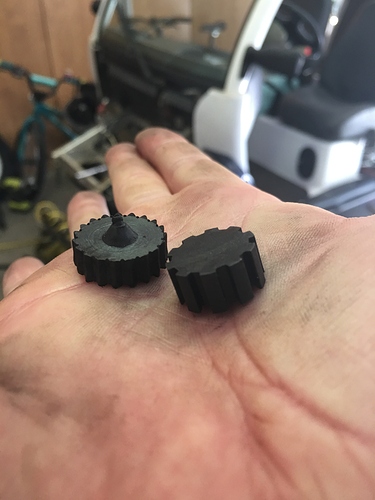 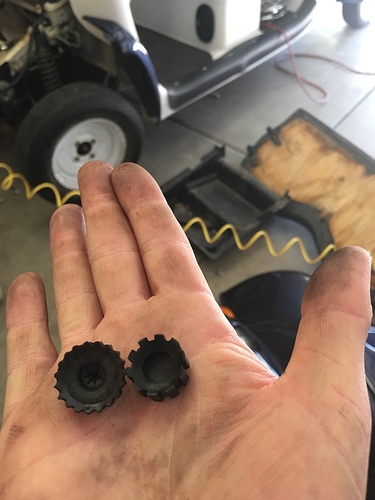 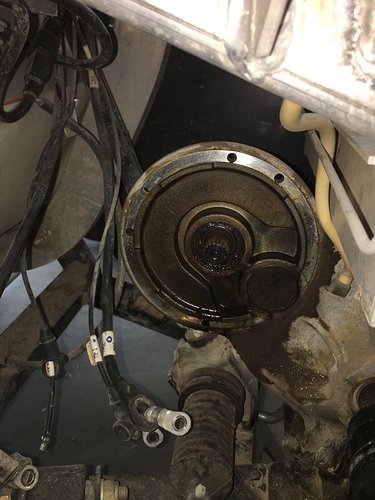 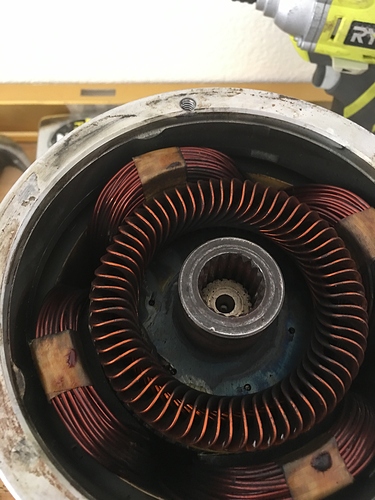 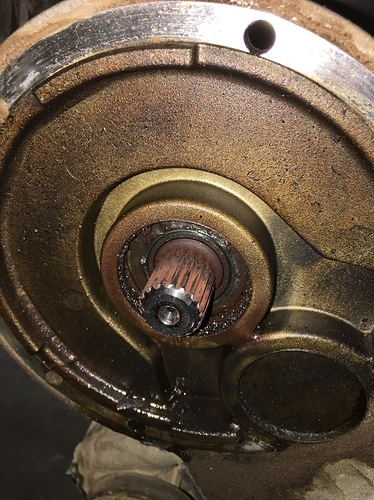 Hi
that new bumper are for Clubcar they have 10 splines

here is your old
you can use this for 19 splines
http://www.buggiesunlimited.com/golf-cart/spline-bumper-ge-motor-(fits-select-models)/3131M

My Resilient Bumper from NEV Acc looked like that too and after only a week the input shaft noise was back… I just ordered 4 of the cheap ones( paid $10 + S/H for the NEV Acc one ).

Once you change your imput shaft bearings check back with us and let us know if that fixed the problem. The next culprit is either the motor Berings or the transmission or cv joints

I have an inquiry into Rodney on the shaft.

He says he has the good bearing, and the new style shaft. I asked him if I could just install his bearing with my current shaft (since it seems ok). Waiting to hear. I’ll order whatever I need right away.

Also. I happen to have my motor apart because I broke an isolator when removing it. Sounds like I should check those bearings while it’s apart. I was going to clean it with electrical parts cleaner as well.

You guys are awesome. I am astounded by the electrical/mechanical knowledge on this board. Makes me feel very below the curve, but grateful to have it.

Thanks for the help Grant! Have a good one.

No problem: you can install the Old style bearings on your current input shaft. If you want to do that simply copy the #s from you original bearings and then order them on EBay they are only a few dollars. But I would advise upgrading to the New style shaft cause I can almost guarantee that when you install the new bearings your transmission will leak through the seals of the bearings you ordered and inject oil into your motor and calls you further problems down the road.

The “new style” input shaft uses open bearings. And the new input shaft has an extra bit of material or what you could consider a shoulder on it that holds a dedicated OIL seal and that slides into your transmission. so the new bearings are no longer trying to hold back oil they simply work as bearings & now you have a dedicated “oil seal” to hold back the transmission oil. This set up works much better. On 1 car I went threw several different sets of bearings each time I had to remove the motor and de-grease it and install new bearings. It’s a pain in the but and a waste of time.

I ordered the upgraded input shaft and bearing kit from Rodney. Thank you for sharing your experience, and saving me frustration. I’ll also drill the motor.

When I removed the connection F2 from the motor it cracked the corresponding isolator, and in turn broke the soldered cable off the head of the F2 bolt, inside the motor case. It appears to have been soldered on. Assuming I can just re-solder it back on? Or perhaps install a ring on the bolt head and connect that way?

This is what I do. place the motor back in the transmission and rotate the motor so it’s in the correct orientation. Only then Mark where bottom dead center would be on the motor. This is where you will drill the hole for the motor. You may have to move the drill hole slightly to avoid hitting one of the windings but is long as you’re close to dead bottom center you should be good. I also like to mark with a paint pen around the bolt holes on the transmission so I know in a instant what 3 holes are used to bolt the motor back in. I also mark the motor. It makes a future motor change much easier and zero guess work.

As far as your wire. Hummm that’s a good one a photo would be worth a 1000 words 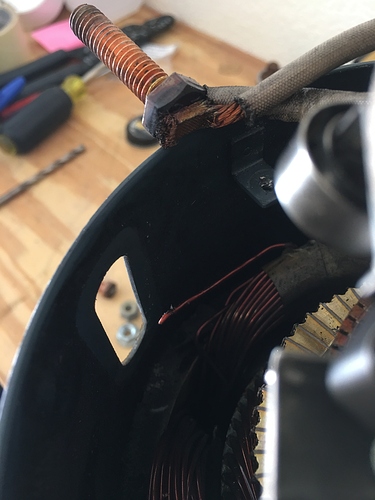 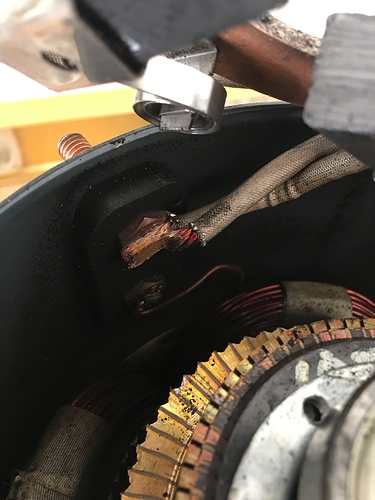 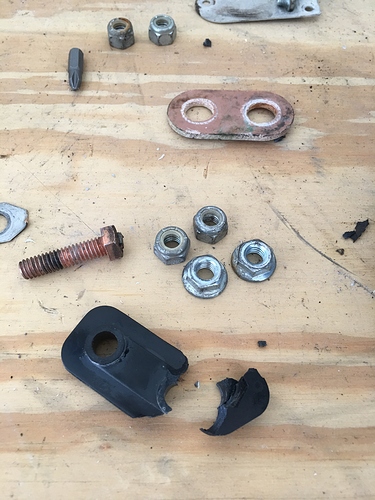 Are you referring to the isolator as the brush holder

Possibly. Thanks for being patient guys. I’m no mechanical whiz.
Perhaps I meant insulator? That black plastic piece that backs the motor terminal connections. 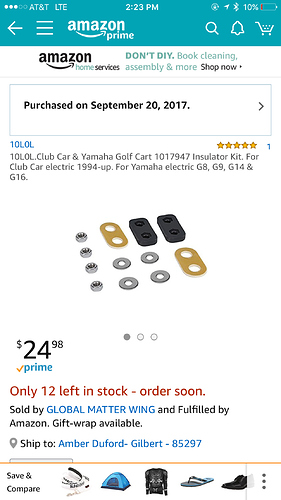 The copper wire near the hole in the first photo. It is usually attached (soldered) to the bolt laying on the bench. Making the bolt not removable. As it is soldered to the coils of copper.

You can see the proper connection of the wire, to the bolt, in pic 2 above.

It appears to have been a solder connection. Going to be tough to get in there…I’ve debated using a metal ring terminal instead. Inside the motor case. Between the bolt head and insulator piece (pic 2 above reference) Thoughts/suggestions?

Shaft removed. In contact with oldhouseboater for a upgrade. 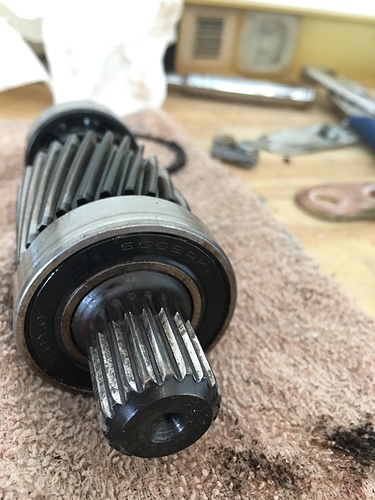 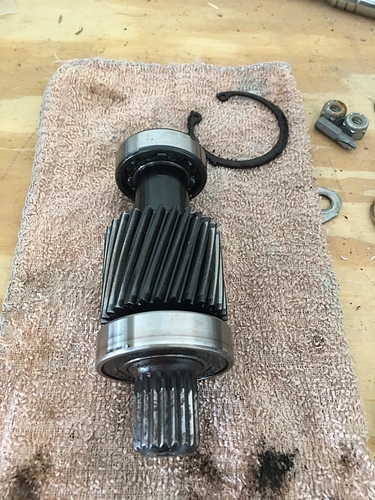 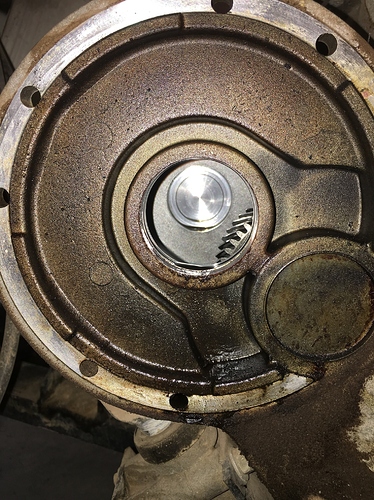 I sell a special bearing that WON’T leak. Not cheap. A 6005 2RS bearing
WILL leak. The original KOYO bearing didn’t leak because the seal to the inner race had an interference fit. This limited the RPM capability of the bearing and it is no longer made by KOYO. The bearing I sell matches the original KOYO and is what I use in place of the seal type kit. I sell both so what ever your pleasure is ask.

1 Most of the time rumble and vibration is the result of excessive clearance between the gearbox input shaft and motor coupling. Changing out the motor usually cures the problem for a while because a portion of the slop is eliminated, Likewise an input shaft usually accomplishes the same thing. The long 5hp is notorious for vibration noise. I have had some luck changing the motor coupling but not 100%

2 The copper wiring to the terminal studs are welded on not soldered. Solder will not hold up. You have to replace the complete wire assembly.