Hi all, I’m midway through the disc brake conversion, aka driver side done… but on the passenger side, the nut connecting the hard line to the rubber line is frozen in place. I’ve tried wd40, penetrating oil, and the thing still won’t budge. At this point I’ve pretty much rounded the nut’s head and still haven’t broken it loose. So for the reassemble I’m going to need to replace that hard line. Does anyone have a source for them? I saw a couple on eBay for the master and all lines but that’s overkill for the one line I need.

Anyone have any suggestions?

Vice grips work great on rounded flare nuts (brake lines) if it comes off with vice grips use them to reinstall too.

I really had high hopes that it would go smoothly after doing the driver’s side… until coming across the flare nut from hell!

Unless you start the process with a flare nut wrench brake line fittings strip frequently. 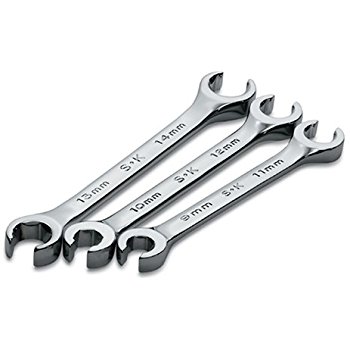 I agree with Mr. Greengearhead… and have had similar problems as you even with a GOOD flaring wrench. What I learned to do was the minute I see imma gonna strip the fitting, I stop and apply a GOOD pair of Vice Grips.

And I do mean APPLY,… by sinking in the teeth of the jaws into the fitting so there is absolutely NO slippage. I then attempt to also stabilize the other half of the fitting so all the torque is applied to the fitting and not twisting the other end. this may require a second pair of Vice Grips.

When loosened, the slightly knarled fitting can usually be salvaged and cleaned up with a file, and then reused again using a good flaring wrench.

One time… on a '79 Fiat, I hadta take a Propane Torch to the fitting and that finally worked. WARNING, WD40 is FLAMMABLE so keep an extinguisher nearby and also use some asbestos or tin to protect other components from the flame. (I’m not sure about the flammability of PB Blaster… but I would use caution and keep an extinguisher nearby anyway. BTW, it is MY humble opinion that PB Blaster does work better than WD40 at freeing stuck bolts and the like.)

One last thing, sometimes trying to TIGHTEN something just a smidgen will cause it to free up and loosen so it comes apart easily. Who woulda thought?

Thank you all for the sage advice… I should have some time today to try attacking it again. Got a torch, a few new different sized vice grips (hopefully they’re good), flare nut wrench set, and some PB Blaster. Hopefully I don’t need everything to get this apart, I can’t help myself though, I like getting and having tools on hand

Yur welcome… let us know how it goes. BTW, I said GOOD vice grips as I have a few from overseas that don’t do much but bend themselves outta shape. I doubt we can find any tools made on this side of the pond nowadays, but there are some that are much better quality than others.I have a pair that was my fathers (Irwin?) and are original. A few years back I just sharpened the teeth in the jaws and it should be good for my grandkids now,.

I was finally able to break it loose! PB Blaster and the new vice grips did the trick, didn’t have to break out the torch. Glad I didn’t have to, I read on the PB Blaster bottle that it’s highly flammable too. The flare nut is toast, but I put it all back together with the vice grips again, no leaks… good enough! I guess I’ll pass on a new line for now, I’m up and running with some disc brakes now

Its these little “victories” that make life so grand! HA!

I made a video on my brake bleeding shortcut. Old timer mechanics showed me what’s called gravity bleeding.