Hello you old ass GoldWing shocks. How did you get here?

I cleaned them up a lot and clear coated them. Hopefully the gaskets aren’t shot but I won’t know until I bolt them up and add the air lines. For $70 shipped it was hard to pass up.
Hoses, fittings and adapters are on the way so potentially I can give them a try on Sunday.

Thanks to @grantwest for leading the charge on this type of mod back in 2011.

Haha, that may be the case at some point. I’m going to get them mounted up and see what shakes out…literally, then go from there. From what I am reading most people call these shocks throwaways because they are a pain to rebuild, so that’s discouraging. If any of them are complete garbage I’ll do a teardown no matter what just for educational sake.
In the very least I’ll have all the hoses and lines installed and ready to go when and if I can afford a brand new set someday.

As for the oil, I found this thread full of good info. The OP said he liked BelRay HVI 10w, but if you read down many people say that’s a bit too aggressive for their tastes. I know the oil coming out of mine is hilarious gross, so this might be in my near future as well.

Found this on how to swap out the fluid. It sounds kind of janky compared to some people using compressors and suction, but it will be the first way I try since I have tons of of condiment bottles in my kitchen(and I’m kind of janky myself).

(not my spelling or grammar)
"a clear plastic mustard bottle works prefect. Take brass fitting out snip off end of bottle. Squeeze bottle stick in hole flip shock upside down release it sucks the oil right out.
couple times you are done .
Empty bottle fill with exact same amount of oil you wish to use put it right back in done."

I “think” 10oz is roughly the fill amount, so use that as a reference.

I bought a set and when I aired them up they bled oil back into my pump. I found rebuild kits and it looks like a lot of work but not at all out of the realm of doable. Will be rebuilding mine this Fall when life slows down a bit.

It’s on the todo list for sure. I bought some special fittings in order to use off the shelf air solutions and npt fittings too. I’d rather buy a brand new chineaseum air compressor for 50$ than buy the 400$ “vintage” air kit that is likely bad anyhow. The shocks themselves seemed to be the big outlay of money.

To be frank, for all the effort involved, I’m kind of kicking myself for buying used instead of just buying this and scavenging two more shocks though.

I’ll be following this for sure. Thanks for taking the dive in and being the guinea pig

These did not come with the fitting on the shock. It looks like the fitting is hardlined to the hoses and the hoses run 40$ for used ones. That means another $80 assuming I can find some hoses that aren’t garbage. Standard NPT fittings do not work either. Oh and it’s missing the tiny gaskets.

I’ll also need to find or cut my own spacers and bushing since these are shot.

Yep, I think I might cut my losses on these and go with a new pair instead. At least the new stuff will have all the accessories I need and I can buy the fronts and backs at a different time when money allows. These old ones are going to cost as much as a brand new set once I buy all the little fiddly missing stuff. Heck, I havnt even checked to see if they are properly filled with oil yet. 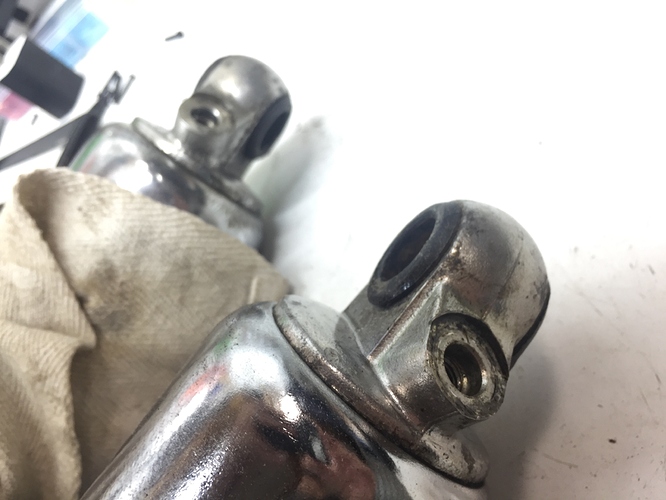 Bummer: some times dealing with used stuff is Way more hassle then it’s worth. The plastic lines on my old 416 air shocks are easy to make and super cheep. But I guess your problem is getting some sort of adaptor. Could you drill and tap new threads so that a standard air shrader valve can be used. Cheep and easy to find.

I feel silly for not thinking of that now. There is plenty of meat on the connector area to drill and tap. I even have the right tap on hand. Thanks for the idea.

I have all the push to connect fittings, hose and valves already. My only major hang up was connecting it all to the shock. All I will need to do is go to the home improvement store and grab a few male-to-male 1/4 od NPT connectors and tap out the shocks. duh.

I’m slightly worried about dumping metal shrapnel down into the shock. Maybe I can blow it all back out. On the flip side though, these aren’t going to be resold for anything worth selling em for so no harm no foul.

And make sure when you do the Air lines that they are independent of each other. Example don’t connect the airlines of the shocks together. Run a separate airline for each shock. Otherwise you could be pressurizing the opposite shock as you go around a corner creating more body roll.

Crap. I was doing a union t for the front two and a union for the back two and planned on using a front and a rear compressor. I probably need to wire in a solenoid for every shock.

All in good time. A little tap-tap-tappity-tap for now.

@diymatt
As long as you are so plumbing savvy, come up with cross connected shocks/cylinders for anti roll system.
Someone must have developed an air ride system with anti roll.

Someone must have developed an air ride system with anti roll.

hah. I think the solution is “add more air”.

I know a few cars have something along those lines but usually driven by a computer.

I can’t get a tight enough seal between the threads I made and the fittings. I’ve tried plumbers tape, thread lock and even CA glue.
Frustrating little buggers. 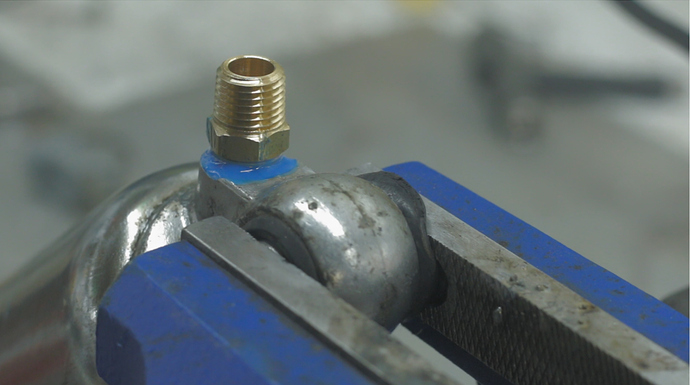 If you can’t get a tight enough seal. Try drilling out the threads and do a New Heli-Coil.

Your right these shocks are starting to cost you more time. But if you don’t have anything to do then it’s a fun project. I’m gonna rebuild a few Air shocks next week. I saw a video looks pretty straight forward. “C” clip removal and add some air and the seal pops out. And then add oil and re-install I hope it’s as easy as it looks.

I was about 30 seconds away from chucking them or donating them to anybody here last week, but hey, I have them, i may as well try until I have the money for new ones. Until then, no harm no foul I suppose, and I have all the little bits and bobs and workarounds I’ve been trying so the spending has stopped.

In the very least you might end up with these as spare parts.

Thanks Rodney. I was trying all the semi removeable options first, but it looks like you are right. time to bust out the hammer.