I’m studying heavily all of the information on this forum regarding converting my Gem to Chevy Volt Lithium packs. I have an old Schott silver charger, and pretty toasted old Trojan batteries. I’m thinking I’ll use this time to convert to lithium, since the outlay for flooded lead etc and a new charger will still be quite high. Also I found a guy here in AZ selling Volt battery packs.

I wrote to Dustin and Innovation Motorsports if they can do a lithium conversion for me.

Here is his reply:

“No we do not. They are nothing but a hassle and they constantly break and have issues. Also the older model GEMs have a very specific suspension setup, single wishbone A Arm design. If you go and pull all the weight out of the car from the normal 6 batteries it’s designed to carry, the car will ride like it’s on 2 by 4’s and you’ll have to change all of the suspension too. Your absolute best bet (if you want maximum range) is to sell the car and buy one of the brand new GEM cars with the (distance gel) option. They do close to 50 miles per charge and it would be cheaper than trying to upgrade an old one in the long run.”

Can anyone please confirm this information? All I’m reading are praises for the lithium conversion and not hearing any regrets from owners…

I agree for the most part.
The conversions we talk about are hobby quality.

If you want to do a Leaf or Volt conversion, plenty of help on here.

Adding weight, or adjusting the suspension with lighter springs seems easily remedied if that is a big deal.

But will it “constantly break and have issues”?

The other issues are similar.
Easily remedied, if willing to do it.
Every conversion and expectation is different.
If you want to drop in batteries, and forget it. Not going to happen.
Flooded batteries need more care, and all lead acid need to be cared for. Lithium is the same.
Many advantages to lithium.
No gassing, acid, corroded connections.
No special charging needs. Partial charges are fine. Fast or slow. Low self discharge. Light weight.
Lower voltage sag.

Well speaking from a person that has done a lithium conversion on an early car, Dustin is right. When you remove all the weight associated with flooded lead acid batteries and drop in a lightweight lithium battery suspension problems ensue . This is only a problem in the early model cars 2000 to 2005. Now if you want are interested in changing the shocks and compensating then sure a lithium conversion on early car is possible it just adds an extra level of complication. Depending on your skill set you may wish to purchase a newer model car and then attempt a lithium conversion this way you’re only tackling one project. I converted a 2002 Gem to lithium and learn the hard and expensive lesson

But you probably needed to upgrade the shocks on the 2002 anyways so wasn’t more of a process of finding the right size and spring value instead of a stock replacement? Or was there more to it than the spring change?

I ask because I have a 2002, would probably do a lithium conversion when these Pb batteries are gone and also have a set of GX1000 air shocks waiting for me to find rubber bushings to fit them on. Most of the weight change would be in the back since 4 are back there and only 2 up front.

Hey I’m not trying to discourage you I’m all for modification and reinventing the wheel but are you willing to spend the time and energy needed to find the right shock spring weight and valving I can guarantee you if you call any shock manufacture or aftermarket company they’re going to scratch their head when you say you have a Gem Car followed by a long silent pause.

I do not understand any of the criticism. I easily adjusted to lighter weight. And, as noted, you can always add weight until you get the ride that you like. But, there is absolutely no comparison of heavy lead acid, or any gel form, to the lithiums. They are in every scientific mag as far superior…for many reasons. Now I just plug and go. I never worry about fluid replacement. I go further…faster. My voltage stays high until the last miles - a characteristic of lithium manganese. I would never go backwards. I would only consider lithium manganese and future forms.

I’m going down the so called rabbit hole with my 2000.

I’m also a little surprised by the comments. Dustin seems against any lithium conversion in general. Also with his wheel and tire combo’s and low profile tires I’m sure his Gems ride stiff already. “Sell your Gem and buy a brand new Gem car” was his advice. Are you you kidding me?

I’ll report back on ride quality, but have yet to find anyone regretting going lithium. Under loading the shocks won’t break anything, it will simply ride stiff. Formula one versus Cadillac… Or add some weight, or atv shocks etc. I’m happy to research this.

Plus later I can pull over, pop open the front, pull dumbbells out of my battery tray and do some arm curls, while you puny guys look on… Because hey, physical fitness is important too!

Part of the fun if you know what your getting into. Grant put all his batteties in back. Others put some in front. It will be interesting to watch your progress.
Fwiw. Lithium manganese isn’t so much a chemistry or battery type, as an additive.
I have mn chevy batteries and also mn life. LiFeMnPo4
Completely different. One being 3.2v snd one 3.7v.
Different strokes!
My money is on LTO. I have zombie lto from 2008 stored dead. .32 volts
Come back from the dead at high end of specs.
Work fine at -40 to 55 C.
20,000 deep cycles.

Sure you can do it but it’s not how it’s suposed to be done!

I hate to agree with innovation, because he is way way behind the times when it comes to Lithium. Sure he can paint or spray rhino liner on a Gem like no other but that’s about it.

This is a Fact. The suspension on a early car is NOT suited to a Lithium conversion. A newer gem like a 2005+ will convert MUCH better and much easier then a 1999-2004 car. If your car is not already cherry with a ton of upgrades they In my opinion I would sell it and buy a newer modle and up grade that one OR option #2. Air shocks and Swaybars and supension overhaul and upgrade it like i did and about $1500-$2000 and your Should be good to go. Check out a thread called Swaybars

I’m getting steak for the price of hamburger. I’ll sort out the suspension for us older Gem owners.

Perhaps I misunderstood but I think he said the single A wishbone was the problem. That would not be helped by changing shocks. Seems like a geometry issue. Without the weight your suspension would not be at the design angle. This would likely lead to excessive tire wear, bearing failures and potentially dangerous steering issues.

Hope Ryan posts here.
He threw his Chevy batteries in and is driving.
Reports stiff ride and camber issues, but nothing he can’t fix.

I’ll create a new thread regarding my install. It’s great! Was going to wait till I get my charger but i’ll post what I did.

Hey Ryan I’m Troy. Still no where near what Dave and Grant know about these carts. But I can say this Grant talked a lot crap when we spoke in the beginning and he was right about the years. So I bought a 2005 and since then never had one regret. I absolutely love my cart and with Dave’s help it came to life. Trust me when I say I was really green and still am but I have great Gem and all my friends love it. 20 leaf cells and now Alltrax 500 amp controller 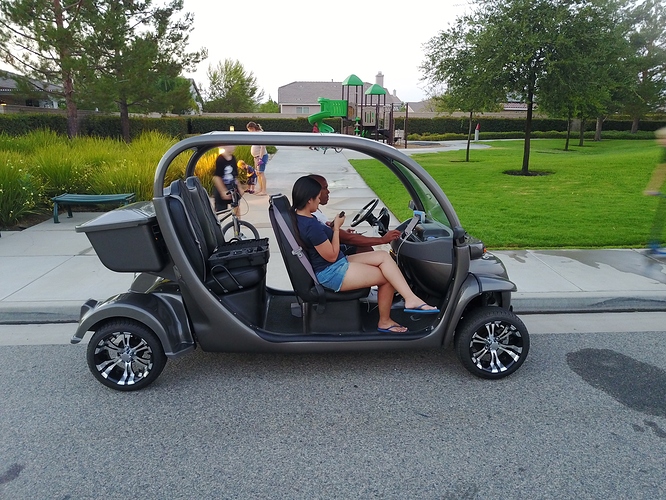 Did you need to adjust the suspension with lithium upgrade? How is it done on an 05? I’m not too worried about it, easy to figure out. Fun as heck already.

No the only thing I did was remount my rear shocks cause the cart was a little low in my tast and it still rides nice. Maybe cause their older and broken in but no problems at all. Feel free to text. I’m always in social mode. LoL I will say that I’m glad I found these guys and bought a gem. I love my cart. I just wannna pimp it out some more. I’m still a speed demon so I think I’ll swap to AC some time in the near future. Troy 714 356-0255