Maybe turn it down so it doesn’t over speed.
Or do you have it set so speedometer is correct?

I have it set on kilometers but haven’t verified it is true speed just feels about right.

It can be changed to limit speed where you want, if you worry it’s too fast for motor.
I can email you Rodney’s rpm calculator or make you a tach.

What is the redline on the 5hp GE motor?

I’m thinking Rodney says 5000. Motor is marked much less, but they survive at 5000.
Hope he corrects me.
I have your email. Darren?
I’ll forward the calculator.

does anyone know what the ge 5hp motor rated or maximum rpm is ? I would assume the factory 25 mph limiter keeps it below max rpm . trying to find out what it’s rated to .

in one of my old posts i did the calcs , well try to find them.

Ok I know I wont get the range you are because of my tires and my very heavy foot. I was getting APPROX 5 miles on one set of 24s. Added another 24s in parallel and only seem to be getting APPROX 2 more miles. I fully charged both packs to 97.4v before connecting in parallel. I have not connected the BMS yet to check balance. Also do most of you turn off your battery disconnect everyday? I seem to be losing 3v after 2 days of sitting with disconnect on.

Have you at least been checking each cell after each charge and discharge?
They may be damaged if one cell went over 4.2 or much below 3 volts.
I get 12 miles stop and go in hills with one set. Never over 1 mile before stopping and starting.

I’ve got my Leaf lithium batteries mounted in the front of my e2 and am ready to have my Zivan charger algorithm programed. I’ve already got Dave’s opinion, but would like to see if anyone else has a preference. I’m using 11 modules and a BMS. The tech from Zivan suggested 517a, below is the table and graph that he sent me.

517a is toooo high , well significantly reduce the life span of a leaf cell . 4.07v is optimum charge for range and longevity . you can go since you don’t have that option go ahead with one of the two that have a v5 of 4.10v

King,
I wish that I had heard from you earlier, I’ve already got my charger back and installed. Below is the sheet that was enclosed with the charger. The customer service there at ElCon sucks, they refuse to return my calls, only email. 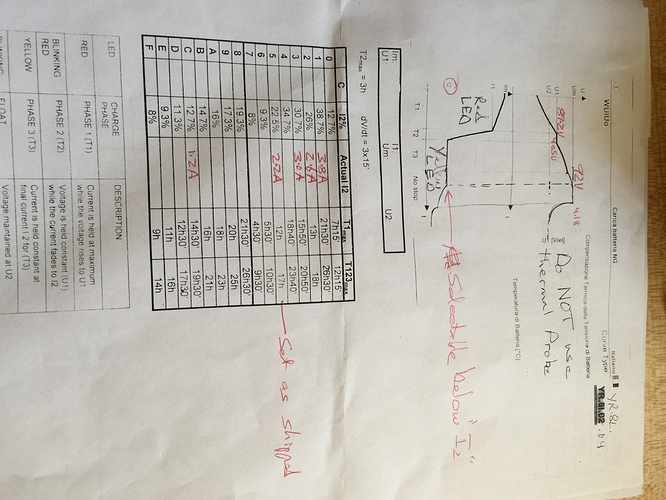 You’re fine.
Mike doesn’t use bms, so he charges to a conservative level.
With bms-24 the 4.2v /cell is just a fail-safe if bms were to die.
Bms-24 lets you set to 4.1 or any level you want. When any one cell reaches 4.1 for XX seconds charger will stop. Balance will bring that cell down to match others.
Charger will restart continue the cycle until all cells reach set point.

Thnx Dave I feel better now. But in till I get the BMS wired in, should I unplug the charger when the voltage is near 88? Remember that I need the control relay for the charger as well. My charger is old enough that it doesn’t have an enable circuit. Time is not on my side, since I will be leaving with the cart this weekend.

Baby sit it the first charge. Check a cell for getting over 4.1v or so. Then check them all for the highest one.
Monitor that one not to go over 4.2. One time won’t hurt. Charger may shut off early.
If not, turn your lights on to bring it down.
You will know the actual level then.
I have other “fixes” once we know what you have.
Did you figure out the sensor?

Did you figure out the sensor?

No, the guys from ElCon won’t talk on the phone, so it is slow communicating with them. Here’s the emails,

And here’s the answer:
“thermal probe is bad, you can leave it unplugged, but won’t have an LED. A new unit will cost you $58 plus shipping.”

I’ve yet to see a Zivan. No help from me.

If you knew how the sensor worked, it might lower voltage or inhibit charging. Like the DQ.

If you knew how the sensor worked, it might lower voltage or inhibit charging. Like the DQ.

With the five pin sensor unplugged, I charged the batteries to 89+ volts. So it doesn’t need the sensor plugged in to charge however, the LED is on the same 5 pin plug.

Just got another email from ElCon: “You’ll need a new LED unit. We are currently out of stock of these.”

the reason I suggest only charging to 4.07v is longevity . you can charge them to 4.20v every time its just that you well reduce your cycle life over time . if you can set your bms to turn off at any voltage do it to 4.07v/cell . As I mentioned above there is not much additional range between 4.07v and 4.20v .

And for what its worth Nissan charges them to 4.07v .