I was near home thankfully when the steering went out. When I looked underneath I found the steering collum had pulled out of the steering box and bearings were stuck in the grease on the worm gear Help please!

What kind of help do you need? Put the puppy back together or replace it.

Im not sure about putting it back together again without disassembly of the box that the shaft pulled out of due to the fact that there are ball bearings floating around the grease on the end of the shaft and I assume down inside the box. I would love to replace everything with power steering as my wife hates driving it.
What do you think I should do try to rebuild or look around somewhere for a replacement?

2002 825 with after market motor and updated recharger

I have 1 EZ Steer unit left

You will still have to replace repair your gear though.

Ok when you say ez steer which part is that? And when you say the gear is that located at the end of the steering shaft? Sorry im stupid about this

The “gear” is the word used to discribe the assembly that is broken on your car.

[quote=OLD HOUSEBOATER;33083]The “gear” is the word used to discribe the assembly that is broken on your car.

Whow the ez steer sounds great my wife would love that too. I’m very much interested in that. Do you think that the gear would be difficult to repair?
It there a picture or diagram of this ez gear?

Read this post. This is one of my first sales a few years ago

Great count me as a customer for this one. I can email you my address for shipping purposes fees etc. and we’ll settle up. Thanks for your time on this!

I have another quick question I pulled the steering box (the pension gear is still attached to the bottom of the steering collum). Should I attempt to rebuild the box or find a replacement. If I need to replace where would be the best place to look, ive checked ebay found one for 190. What might have caused the collum to pull the box apart?

Hey Rodney Turned me on to this little trick. On my 2002 rack and pinion. It has 2 nuts at the bottom side. If your handy with a grinder you can do this with them in the car as I did. You can grind a slot in the nut like this.

The slot will be used so you can stick a screw driver in it and tighten The steering. If your car has any slop in the steering a few turns will tighten it up and get rid of the side to side slop.

This is what they look like from the underside of the car No way to tighten them with the rack in the car.

This is what it looks like after you make a slot in the bolts.
I marked my starting point so I could see how far I had turned them in.

A few months ago I did the Disc Brake Conversion on my 2002 e825. While I was working on it, I noticed that my steering boots were torn and while I was at it, I replaced the upper tie rod ends as well. I was really careful to measure everything up so that I could try and return it back to the original condition and not trash my alignment. When I finished, I checked the alignment which looked pretty good but I’ve noticed that I think that I have play in the steering. The cart steers ok but it feels “floaty” and requires more turns of the steering wheel to turn.

I stumbled on this post and was hoping that I could use the above method to turn the steering rack screws with using the grinder method to see if that helped. When I went under my cart today, the picture compared to above looks similar but the front suspension frame seems to be blocking the bolts that I would turn.

Do I need to lower the entire front suspension to get to it? Or is there something that I’m not seeing/doing correctly? I read on another post that I could loosen the bottom of the springs/struts but it seems like lowering the front suspension will require more than that.

Here’s a picture of my setup: 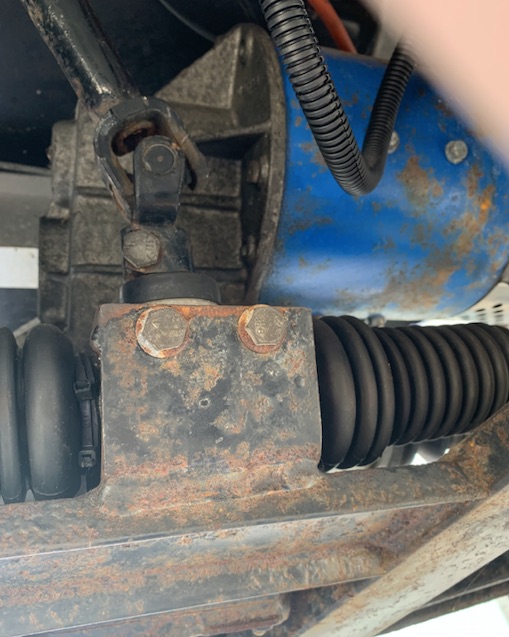 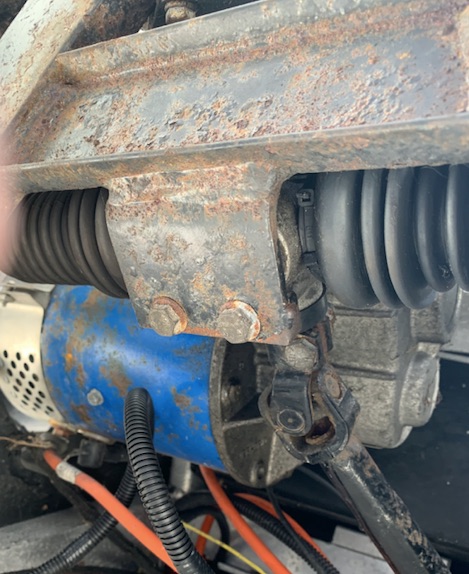 From the pictures @grantwest posted it would seem you would need to drill 2 large holes in that plate so you would have access to the adjustment bolts. That would mean moving the rack/pinion box away from the plate and I think it was stated it can’t be done with the steering box installed.

Hello
I have 2002 E825 4 seater, I’ve been talking w Mike-King Happy about doing his lithium upgrade, I also need to address the terrible steering and braking if I do the Lithium. Are you still making the Ez-steer to combat the poor steering?
Is this something a guy w average skills can install?
Also who sells the brake kits to address that issue?
Thx I appreciate your help

Do a NEV disk brake upgrade ASAP. Have done two carts and they make all the difference in stopping. If you are a DIY kinda person, DM me and I will send you pictures of the kit parts you can chase down on your own, I decided the kit was faster and simpler.