I have a 2015 GEM E4. I bought it about 6 months ago and it’s been great with no problems until this: When I turn the key the dash doesn’t light up. None of the components work for example, the horn, lights blinkers etc.

I checked the breaker and it is on.
I checked the Dash fuses, there are 2, 1amp. They both appear to be intact. I swapped them around with the other 1amp fuse just to make sure and still nothing.

The Delta q is charging correctly.

Possibly related: The motor is a goner I believe. It has had problems going in reverse and I can hear something like electrical shorting with the motor in forward. Sizzling, crackling sounds. I will be ordering a replacement from R4F.

Seems more than coincidental that the dash and motor go out at the same time, but I can’t think of a reason why they would be related.

I don’t suspect that your issues are related.
The no power issue is likely your DC/DC converter going bad. It is a newer car but these fail often and many times with no notice. This runs all your 12v systems, lights, horn, turn signals, etc.

EDIT -
On your car, the DC/DC converter should be built into the charger.
Follow @AssyRequired request for info so we can find out more.

Thank you for the fast response. I’ll order now. Let you know if that’s it.

What is the backstory on this car?
Has this car been sitting?

Maybe it is the key switch?
(I mean, if he really wants to replace the DC Converter before checking it then ok)
I think the DC Converter is in the DQ Charger? In which case he needs a DQ-DCI.

If so, then what happens when you drop the brake? Does it beep?

The car has been mostly unused lately. We only have been moving it around the driveway when it’s in the way.

The batteries are fully charged and the delta q seems to be operating correctly.

The parking brake does not alarm when dropped with the key out.

I’ll check voltage at the PSDM. Any hints on where to test this? It looks like the PSDM is the fuse panel, is this correct?

The parking brake does not alarm when dropped with the key out.

Was the power switch flipped on when you did this?(the flippy thing at the bottom of the fuse panel). This is the first test you can do to check functions in the car. Once the Main Batt Switch is flipped ON this circuit is active. It is part of the roll-away alert when the brake is down.

Start at the beginning and work forward.

The batteries are fully charged

Call me a skeptic, but how are you observing this? Check with an external meter on the battery pack and look for ~81v. Make sure all connections are clean and tight. Check each battery and then check across the entire pack to get a PackV reading so you know what to expect as you go forward.

the delta q seems to be operating correctly.

This too. What are you seeing? Is it powering up, going through the boot sequence, Charging a couple of bars for a while then ending up with a green light?

Moving forward, you should remove the top of the dash. Even better (and not that much more work) is to remove the lower section of the dash too. Then you have full access to the PSDM (Power Supply Distribution Module - aka the fuse panel thing). Gem engineers came from NASA(not really). Check for Pack V at the two terminals on the right and left posts. 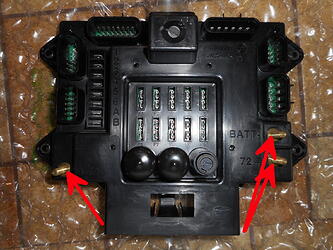 Report back with what you find.

Update: The Delta q is showing a fault, red light 2 flashes. This is low voltage from what I read. It had appeared to be charging correctly yesterday and this morning showed fully charged. But after I just checked it’s showing this fault.

I assume now I will need to check the batteries individually and bring up to 12v as needed. After that I can begin to troubleshoot again if the problem is still present.

Also- Know that the car activity changes when the charger is plugged in. Due to the interlock (that keeps you from driving away) the car can appear “dead”.

Unless stated, all tests are referenced with the charger unplugged.

now I will need to check the batteries individually

Yes, What is the state of your batteries? “Batteries are good” means nothing to this thread.

Also- Do NOT drive your car until you check out/service your motor. Driving it in this condition can damage your motor controller. At least pull it out and check for stuck brushes. (that happens when you let the car sit for long periods)

Ok, I was incorrect in my last post. The Delta q stated 2 flashes fault because I had turned the main breaker off while plugged into AC.

The voltage entering the PSDM is 78v. Voltage at the 3 poles are as follows: (Assuming they are all + and using the chassis as ground). The single pole on the left is 78v. The two poles on the right are both -.7v

OK - I’ll go over some basics.
There are three kinds of electricity on this cart.

First one being 120vAC (house power). This comes in from the house (via power cord) and goes into your charger. It is pretty much sealed up and difficult to find/touch (which is good) unless you take something apart.

Second one is Pack V. (aka B+, ~72vDC, drive power). It is supplied by a bundle of cells in the back of the car. You usually measure them at the cells directly, in a cluster or pack. For safety reasons this pack is not attached to the frame. The actual number will change depending on the state of your charge and even the build of your pack. This is why you will mostly see it called B+ when referring to this circuit.

Third is Accessory power. This is 12vDC. It is supplied by a DC Converter. Just like your car the Accessory system IS tied to the frame and can be used when powering 12v devices like lights, stereo, and other things.

When using a meter you typically have one wire you are probing, and the other meter probe goes on a mating reference depending on what power you are dealing with. If you mix references then odd readings will show up.

In this case those studs I pointed out are actually marked on the PSDM as +72 on the left and -72v on the right. The two on the right side that are both B-. This is for the internal shunt for the batt monitor.

So- I would like a reading across both the left and one of the right terminals on the PSDM.

Ok, both read 78v. From the single pole on the left to either on the right, all 78v.

Make sure car is unplugged.
Main Bat Sw ON.
Try key again. Anything on the dash display?
When you switched key ON do you hear a faint click at the top of the PSDM?

On the left side of the PSDM is a row of connections. There may be some wires plugged into them. With your black meter lead on the dash frame, put the red test lead on 6.
What do you get? 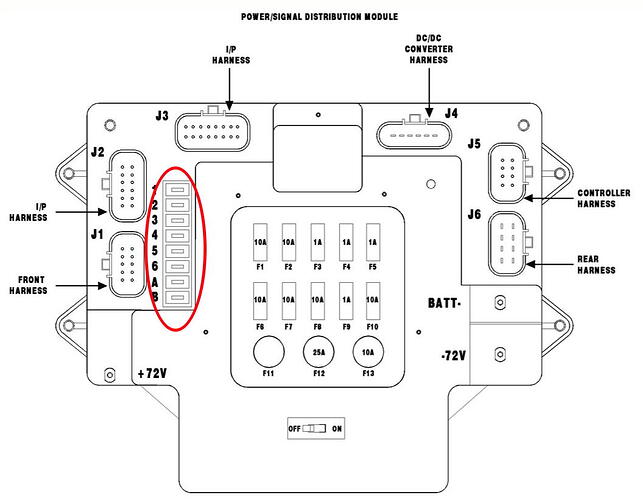 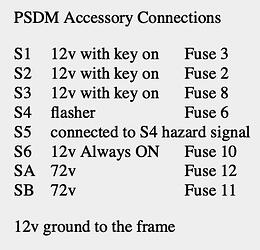 Ok, #6 has no reading. 0 volts.
I checked the one below it just to see, it has a fluctuating reading something around 1.5v.

I assume I have to check fuse 10 now.

Sure- move over and check fuse 10. black probe on dash, red probe on the fuse test point, upper then lower.

Note what V is supposed to be on the one below 6. That is connector A. Remember what i was saying about using your correct reference? (hint- you should be using B- instead of dash frame when checking that)

Fuse 10 appears intact, I went to swap it with fuse 8 just to see, and that fuse was blown. So now I’ll locate another 10a fuse and stick it in there. May be tomorrow though. I’ll check the fuse port with the meter tomorrow as well.

Don’t be too distracted by F8. That is probably something secondary
I was looking for actual 12v. Verify Y/N? 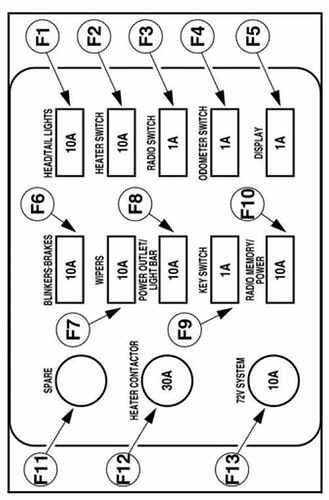 I suspect No.
In which case we need to look to see if anything is coming out of your DC Converter. As discussed earlier this is built into the DQ Charger.
12v supply is brought in on J4. (upper right of center at about 1 oclock on the PSDM).

This plug has 5 wires. You should see 12v on the Black and the Red Wires. 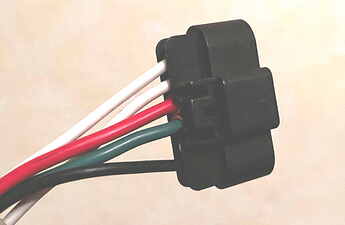 The hard part is getting into the end. Those pins are flat and narrow. You might need to use some straight pins to probe in there. 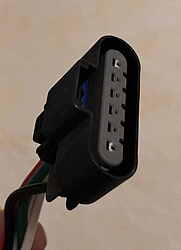 Today I got to the cart and turned on the main switch and key. There was a relay clicking this time. Random fast clicking on and off. The display started blinking on and off. Then everything would stop. I checked the J4 and it had less than 1v, but a couple times it would show 13.v. When it showed 13v I plugged the J4 back in and the display was on. It stayed on for a couple seconds then the relay started to chatter again and the display died. Volts on J4 back to <1.v. I cycled the main switch and sometimes the relay would start cycling on and off.

The relay or solenoid making the sound seems to be either inside the PSDM or behind it. I think it’s inside because I can feel it with my hand on the PSDM when it’s cycling on and off.