Hey Everyone. Need some assistance in adjusting my brake pedal.

I’ve noticed that sometimes my brake lights stay on. I get them to turn off by placing my foot below the brake pedal and pulling up on it. I figured I just needed to adjust the brake switch.

According to the service manual, my brake lights are activated by the “switch-brake pressure” that is mounted to the side of the master cylinder. It has orange/red and Brown/dark blue wires going to it.

In the service manual, in section 4-9 (page 36 of 142) it talks about a “return spring” that forces the pedal (and push rod) back to its original position. However, my setup does not have a return spring anywhere that I can see. I also found this post which also talks about a brake pedal return spring and how it was even updated according to a Gem bulletin:

Is there a way to adjust the pedal? At times the break light is stuck on, I have to lift pedal up.

If I pull up on my brake pedal, it moves about half an inch. That half inch of play could be eliminated by a return spring. I just have no idea what it looks like or where it goes. Even the parts diagram does not show a return spring:

Can anyone please provide any info on how to remove the play from the brake pedal? Is it done by adjusting the rod going into the master cylinder? Or am I simply missing a return spring? Any help/info/pics/guidance would be great appreciated.

Awesome detective work marshmlow!!
Last I was under there on my 09 I believe I saw the spring as a coil type that was wrapped around the pivot at the top of the pedal arm very close to where you saw the regen switch. In my collected document library I do not see a spring listed for a 2004 so I think you are correct in your observations. I did find one listed in a diagram for a 2010.

I bet this is something that can be retrofitted. If your hardware looks like there is room it might be worth a try.
I see your options are to:

Hey @AssyRequired thanks for the reply! and for the compliment

Just to clear it up, I have a 2005 e4. In my further research after my initial post, I found something very interesting. When I would go to gemcarpartsdirect.com > brakes > 2005 I get a parts list on the first page which included 15 items. No return spring anywhere. See the parts catalog comparison picture below; it’s the one on the left.

However, after looking at the same parts diagram for a 2007 model, I noticed that it included a return spring in the diagram, and it had a part number of 0611-00684. I also noticed that the brake pedal diagram was almost identical to that of a 2005, with two exceptions:

Here is a picture of the 2007 brake assembly parts diagram:

Using that part number, I did a google search and found an updated version of the parts catalog for 2005/2006 model year.

In it, the same page that I had previously found all of a sudden had a new part number in the diagram. It was the return spring which has been labeled 16. It is on page 102. Here is a comparison pic showing the difference in the catalogs:

I was able to order the spring directly from gemcarpartsdirect.com by calling them. They happened to have one in stock and I received it today. I will try to install it tomorrow and see how it goes.

Interestingly, both the invoice and the packaging had a completely different part number. This number (7043843) must supersede the other one.

I will post back with an update. Thanks again for the reply and the great suggestions!!!

While you are in there you might think about drilling another pivot hole for the cylinder shaft. I think it was about 1/2 or maybe an inch up closer to the pivot. It puts a bit of an angle on the shaft but he sait he’s been running that way for a while without issues.

I think it was @Old_Houseboater that did this but I can’t seem to find it and I spent way too much time looking. Maybe I saw that on the other forum?

You’re correct, it was Rodney, and it was posted here (too). I don’t know one way or the other about “the other place”

Here tis guys. The search function up in the corner works good. Give it a try

This was intended for Drum brake carts.

Brake performance improvement I have installed on my 2000 E825 4 seater. Do at your own risk as I cannot predict long term effect. What say you? [brake pedal]

Thanks for all of the replies and the suggestions everyone.

Unfortunately I didn’t see this until now and I put everything back together already. But I’ll keep in mind for the future if I feel I need to improve the braking.

Here are the basic steps I took:

It came out great. The pedal now sits at the top and it has very smooth travel. Below are some pics and a quick video showing the end result.

Thanks again for the assist. Hopefully this information helps out someone else some day. 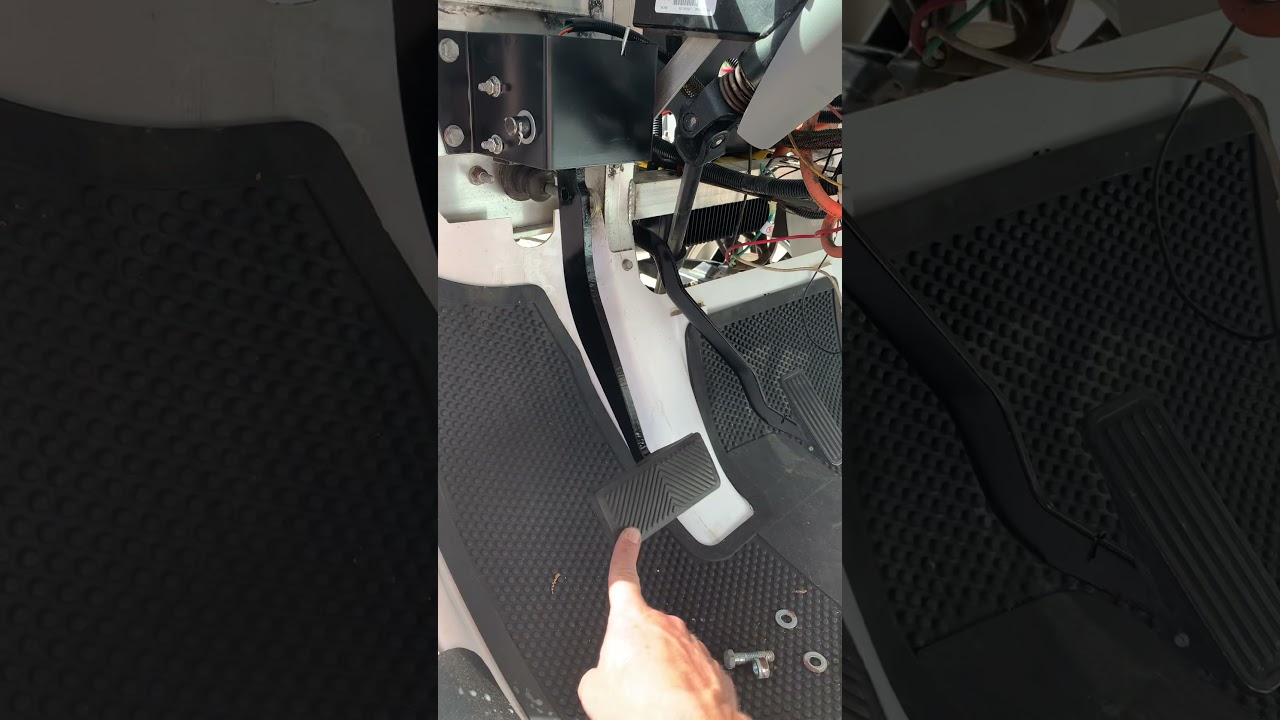