I just purchased a 2005 GEM ES that did not have any batteries and was missing the DC to DC converter and did not have the QuiQ charger installed. I installed a good DC to DC converter and the battery charger, as well as six 12 volt Trojan batteries. The LCD display showed full charge. I drove the cart about 20 miles and the gage went down as I drove the cart. At the end of the ride it showed a little less than half capacity. Everything worked correctly and the cart performed great.

After fully charging the batteries, the percent charge meter never changed on the display even though the voltage measured around 78volts at the distribution panel and the QuiQ charger successfully completed its charge cycle. (The meter should read fully charged).

When I drive the cart the % charge continues to drop from the last reading even though the batteries have been fully recharged.

Does anyone have an idea of what I need to do to get the display to read the correct charge status? Have I mis-wired something?

Sound as if charger is not connected properly.

There are only 4 wires.
Red - Battery positive
Green - Interlock
White and Black - Thermistor (new - from Polaris)

The Charger profile is “13”. There does not appear to be any other profiles installed on the charger.

Could this program be an issue for charging the Trojan Motive T-1275 batteries?

OK. I am 100% certain that the batteries are fully charged. I checked each individual battery with my 12 volt battery charger and they all read 13.1 volts each and 100% capacity.

I have 2 green bars on the display.

Yes- but it is important where your red and black charger wires are attached to in the grid.

Your SOC battery meter reads by keeping track of power coming and going through a shunt. It sees power being drawn out when you drive and deducts it from the bar graph. If your charger adds power in the wrong place the SOC meter never sees it going back in.

Are you using the Batt temp sensor? White wire?

Now that your pack is charged and hopefully some charge wires rerouted, you will need to reset the SOC Meter. (manually tell it the batts are full).

I speak from experience. I ended up with the right one from Dave Bissen (INWO) 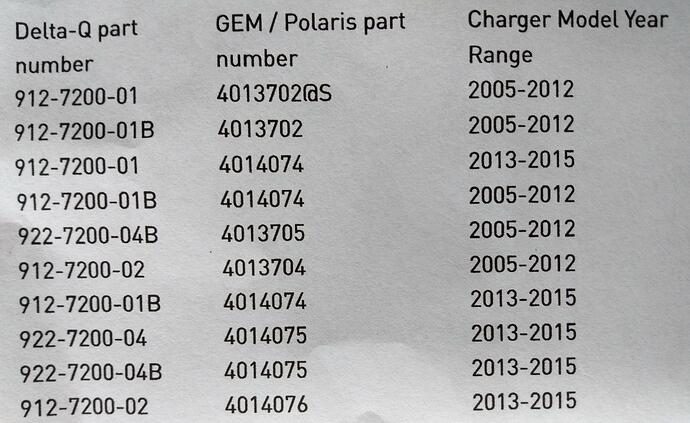 @Old_Houseboater
Yeah, I was hoping one of you would chime in on this. I heard you mention it before, but I don’t understand it. (This is something I still need to study up on).

I was going on the assumption this was the same charger that came on his 2005, but was just unhooked by the PO for some reason.

I appreciate your help. I moved the wires per your suggestion, and it works great. Thanks again!

In the last couple of weeks I have learned a lot more about GEM carts than I ever thought possible.

After I moved the wires it started reading full charge, and then showed that the batteries were decreasing as I drove it around town. Plugged it back ups dn watched it increase.

Thanks for your help.

Thanks for the great information. I was able to get my charge indicator to work correctly by moving the wires around as suggested above.

I really appreciate the help.

any charger will work with the meter. but it must be run threw the meter. 100’s of people use use the R4F super charger and the quick charger. iIf wired to the correct place the Gem charge meter will work correctly. The factory chargers have no commination logic in them, they are the same as any other charger.