A few of you have asked about the dash in my Gem that was done this winter so here is a rundown of what I did when installing an Ididit 16” GM column from a 1972 Chevy. 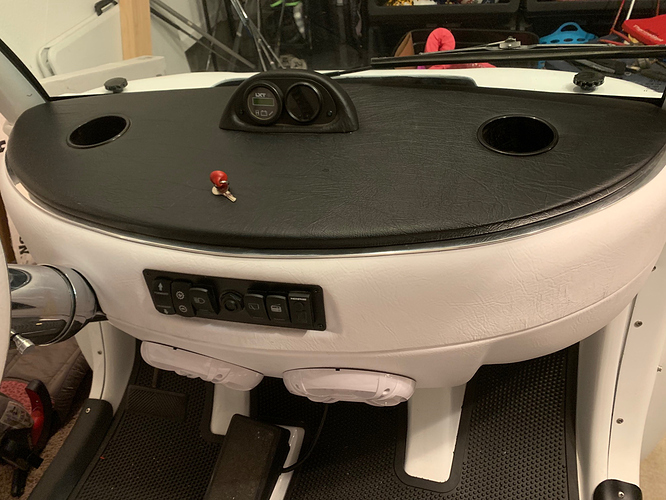 First thing I did was remove the locking door on the dash to create a somewhat flat surface. Then I took a ¼" piece of plate aluminum and cut it in a 3” u shape to match the curve of the dash and had mirror polished at a local shop. 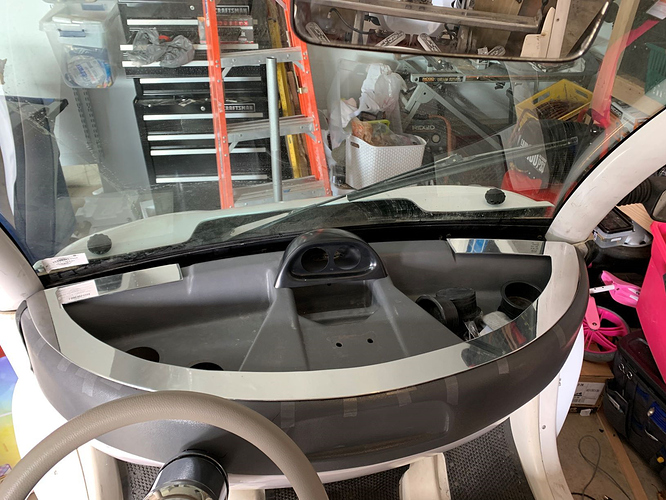 Next I cut a ½" piece of MDF ½" smaller that the U shape to give what I thought was a nice stepped revel. I had this piece of MDF covered in padded vinyl and had the lower dash covered in matching vinyl as the seats at the interior shop. 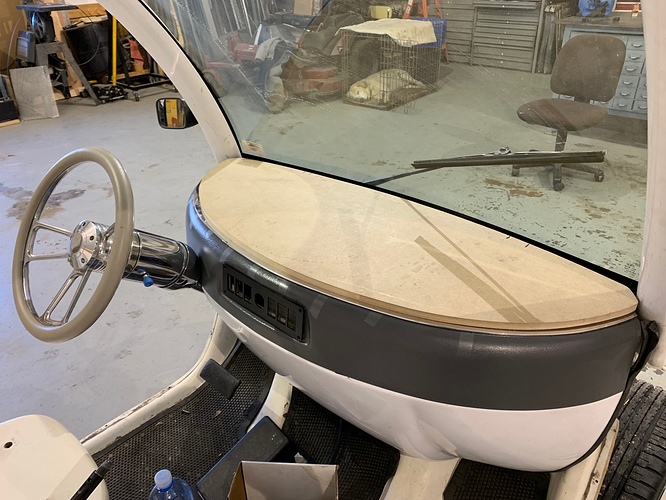 Due to the column change out I needed to move the switches so I purchased Carling Contura style switches that matched the original switches but purchased double pole ones to accommodate the many addons. For example, the forward/reverse switch second side controls the backup camera and the headlight second side controls the switch lights etc… This made many things very convenient. One thing you must do if you use these style switches. The original Gem car wiring needs to be on the isolated circuit side of the switch. My car would not operate and I got many error codes before I realized this. To make removal of the dash easy I put all connections on Molex connecters. 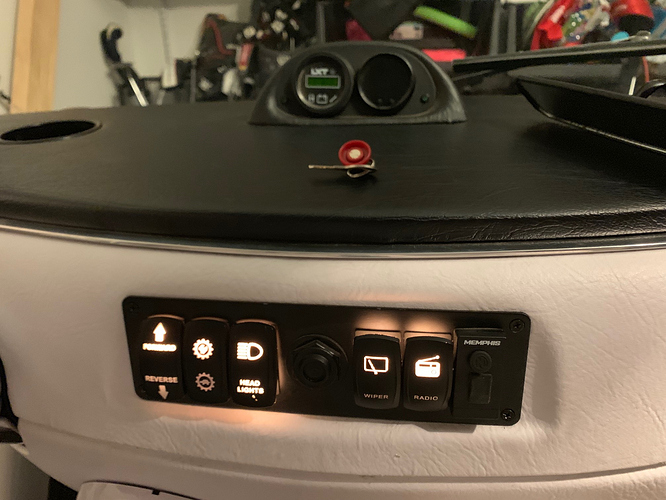 I added extra-large cup holders to fit a Yeti cup. 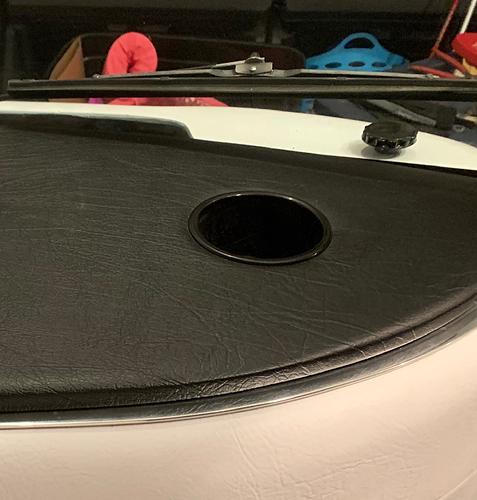 The center gauge pod is from a Gen 4 (1994-2004) mustang. This had the 2” holes that I needed and I thought it looked the best of any of the options I had found. There was 8mm green indicator lights added to each side of this pod for the turn blinkers. 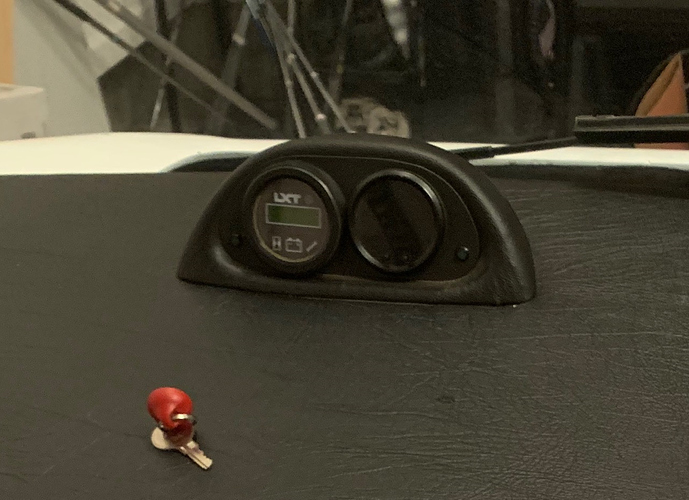 I have purchased buy not yet installed this wireless charging pad. It will go in the center of the dash blank spot. 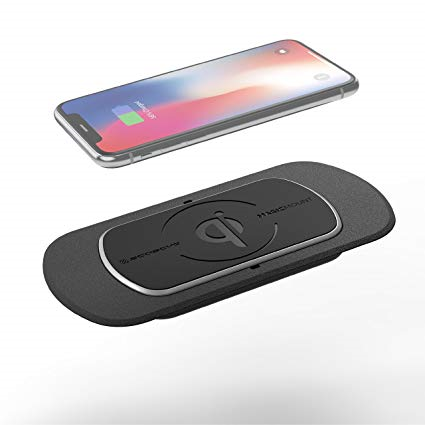 Hmm. What’s that RED thing on the dash… LOL, How is that working out for you?

Looks like a magnetic kill switch of some kind. It was connected in the middle of the switch panel in one of the other photos.

It is a 2 wire motocross kill switch. I got the idea for the mod from @MikeKC. Works great. The original key switch I was not a fan of and I needed a new one also.

Yea, @RS_E6 - it was a joke (a bad one). We use them instead of using a key. Super simple and easy to keep track of. On mine, I can use the key or the magnetic switch.

Hey that’s some cool custom work.
May I make a quick suggestion. I would counter sink your phone charger. Or place some sort of fence around your phone or magnet so it stays put. 2 weeks ago I was driving & I was directed to make a “quick right” well my phone was on the dash and it made a “Quick Left” out of the car at 25mph. Broken screen ect.

This is some absolutely sick customization! Where do you live? I want to see it up close.
It looks like you have newer car than I do, I don’t have the radio cutout in my dash. I’m not going to change my steering column, but I love the dash and especially want the Yeti cup holders. I’m working on a new digital display unit that once its done will need a home and you’ve inspired me to think way outside the box. This is awesome!

@Mr.Vern Thank you! With so many people doing cool stuff to their cars I also wanted to think outside the box and do things that I had never seen done before (not trying to steal someones thunder or claim their ideas). Wire grills, tilt column, dash, switches, headliner, Apple CarPlay, back up camera, navigation, 10” sub, 8” screen etc. It was the most fun I think I have had in a long time.

I live in Kansas City, Missouri. Come by anytime I would be more than happy to show you the car.

Here is a link to my overhead console and headliner. @grantwest also has a thread on his overhead console. I started new topic because I did not want to step on toes and hijack it. I will leave up to Admin @Old_Houseboater if he wants to move/combine.

@grantwest thanks for the heads up on that. Sorry about your screen. The kit for the charging mat does come with magnetic discs to attach to your phone to hold in place. I will explore the idea of making a border around the charger for added phone safety. Here is a link to the charging mat

I bet the magnets that come with the phone charger will do the trick. I didn’t think about the charger base having a magnet

I’m sitting in my 2002 right now and I can see that it dips down in front where yours is flat. Would have to approach it differently. Perhaps fill it with expanding foam and then cut that to shape and upholster over it. Have to think about this one cause I really like what you’ve done. I’ve pimped mine with bedliner paint, wheels and painted all the gray dash and column black, and of course added 96V lithium setup. Next step is a custom display to track essentials like battery voltage, battery charge voltage control, speed, motor temp, current draw, elevation (using GPS) and whatever else I think of. I want to integrate all of that into a dash display that also has a backup camera because these mirrors are useless as anything but a decoration. I’m inspired by your dash. Thanks for sharing.

@Mr.Vern here is a link to more of the mod package relocating radio

I am thinking about next winter when I do lithium upgrade hiding original Speedo under hood somewhere (so I can see error codes) and installing a 2” round gps Speedo in its place and in other hole a 2” round battery meter.

That’s interesting. I had originally wanted to use one of those overhead consoles but couldn’t find one anywhere. I then decided to just install a BT amp and stream tunes from my phone. Ended up doing that in my boat as well. Works great. I might design carplay functionality into my display controller one of these days. Takes so much time to develop and write all the code that I may never get it done. If we don’t have a good snow this winter, I’ll have plenty of time, if snow is good, it won’t get done.

Summer is when I really use the car a lot so I try to limit my projects so the car isn’t down when we need it. 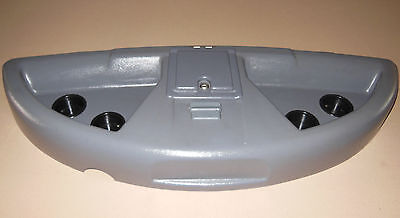 For sale I have an excellent used original factory 1999-2001 ( two seat or 4 seat vehicles) GEM electric car (Global Electric Motors, Polaris, NEV, Think). I have another listed that is the newer style.

Here is one on eBay for 185$. You would have much more in time and fiberglass than just swapping out. If yours is in good shape many people are looking for them in good condition for their restoration project.

Here is where I found the overhead console I purchased. Looks like they have some left.

100%25Authentic-Genuine Polaris NEW OEM. Custom designed for your GEM® car, this overhead console will accept most car stereos for "do it yourself" projects. About Polaris. See the list below for other models this part fits.

I had seen that but it doesn’t say it fits my year. I didn’t want to take a chance. So it fit yours no problem then!?

Yes it does. When they switched dash style they added a plastic piece that bolts under dash for water proofing. You will have to trim that and maybe two new holes in windshield frame under hood for dash bolts. The curvature of the lower dash piece is exactly the same. I will have my hood off later and I will measure hole distance and send pics to you. Here are pics from parts catalog to help explain. The first pic is what u have to trim. The second pic is where iyour dash goes over it 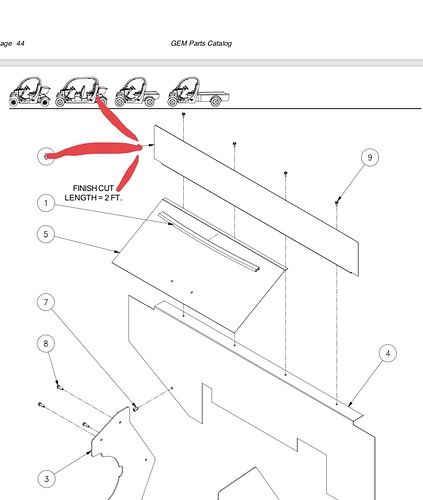 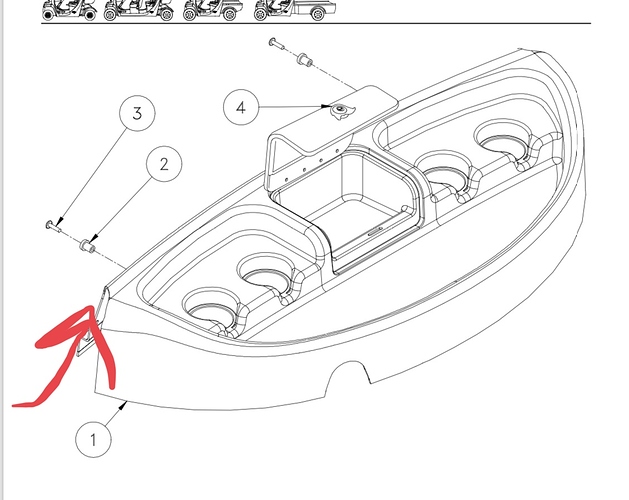