I acquired a project GEM 2014 E6s from an auction this week. Both rubber boots on the rack and pinion steering need replacement. I looks like Polaris wants $55 apiece! These seem so generic and common in size. Has anyone found a replacement for these? Thanks in advance

I’ve bought Polaris Ranger steering rack boots off amazon in the past for like $10 each for my eLs. You’ll have to check the size for the E6. I don’t don’t know if it’s different or not.

Thanks for the tip jrjava! Just bought a pair off amazon for Polaris Ranger for $16/pair. I’ll give f/u on the fit–

For a 2014 Gem E6, I did purchase Ranger steering rack boots. The outside of a polaris ranger steering boot fits the threaded shaft, but the inside diameter of the ranger boot is 1" too wide. You can’t get it secured wth ties to the rack and pinion tube. Looks like NEVaccessories has them for $16. I’ll give them a try. Polaris says part is not available at this time–

NEVaccessories boots fit fine on a Gem 2014. Reccomended. Boot on the left is from NEV and worked on a 2014 E6. Boot on right is from Amazon . 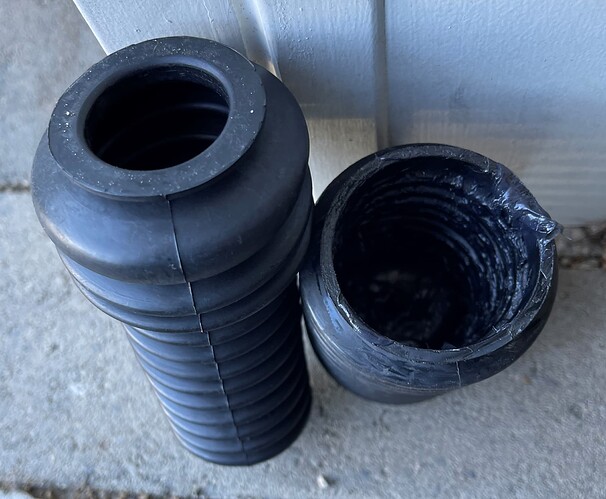 That’s because they are selling you individually bagged aftermarket Polaris p/n 5412013 boots. The exact same ones which are sold individually on Amazon and eBay for about 40% and free shipping included. Probably all made in the same factory.

p/n 5412013 is listed in some GEM parts books as the p/n that supersedes all previous GEM boot p/ns for the classic gems, even on the vehicles that might have had different boots at one time.

Not knocking NEVA, they are great for many reasons, but their parts are very often available elsewhere for less money or better quality, or, both. Just have to spend a few minutes investigating to figure out the part you need.

It was late, I accidentally left out the words “classic GEM”. The 5412013 fits driver and passenger side on most, possibly all classics.

As for he 2018 e4 boots, maybe… The guides can be confusing, because Polaris sometimes didn’t put the note about a superseded part in every year’s part books. Sometimes you will find the note on a book for a GEM a few years newer, yet that GEM originally had the same p/ns as the ones on the older one you actually need the part for,

Here’s the online part guides, select “LEV” for product line.
If you see eM1400 or M1400 on the model pulldown, careful about using it as a reference, it’s a unique part Ranger, part GEM, part Tonka truck.

Just checked, the boots needed on that site don’t have a part number for the boots but have “-------”. Maybe because they are unavailable? If anyone has a source for 2016+ boots let me know. Thanks for the Polaris engineered parts link. Polaris lists number # 5416754 for the left side and # 5416755 for the right side.

boots needed on that site don’t have a part number for the boots but have “-------”. Maybe because they are unavailable?

Yes, that’s one of the faults on that site. I’ve run into that. Check other years around your cart, you’ll probably find a part number. For some reason they might list it as ---- for a particular year because that old part number no longer exists, even though the newer model of the vehicle has the exact same part, but the number was updated, they just never went back to update the older document

@LithiumGods did you ever find a boot replacement? I need a passenger side for my em1400. I tried buying some that appeared to be the correct ones but I ended up with 2 driver’s side ones, not sure if it was packed incorrectly or if the product doesn’t match the advertised photo.