I’m looking to upgrade my 2001 GEM cars to lithium batteries. The GE motor controllers are rated for 350AMPS, which I presume is a peak current that the existing lead acid batteries can handle without damaging themselves, but most of the new lithium batteries come with a BMS that cuts off power above a certain current threshold. Was going to go out and run the GEM and measure peak and average current during tough driving including hill climbs, but thought I would ask here if anyone else has looked into this and come to some conclusion on what the battery amperage needs to be rated for in terms of peak and constant current? There are some rather inexpensive 72V motorcycle batteries rated for 80AMP constant current. Was thinking 2 of those in parallel (160AMP) would be enough…

Should have included that one GEM has the original 5HP motor, the other has upgraded to the higher speed (I think 9HP) motor.

Need 350a peak and 200a cont.
That is what my Samsung batteries can do.

There are some rather inexpensive 72V motorcycle batteries rated for 80AMP constant current. Was thinking 2 of those in parallel (160AMP) would be enough…

Not a chance. They will not play well in parallel.
The group on here have done the work and can advise what works.
One thing we learned is series and parallel bms are bad.
Lifepo4 is fo solar not evs.
Lfp are cheap and you can get by, I sold a ton myself, but nmc is whats used in all current production cars.

Also look at ah and kwh. Translate, miles. There is a reason they are cheap. Minimum of 50ah needed to get out of the driveway.
Figure 250 w/h per mile.

The batteries I was looking at were for electric motorcycles. They are 72V and 40ah each, so in parallel would give 80AH total, which seems plenty as the car comes with 100ah lead acid, but you can really only get 50% of the capacity out of LA before potentially damaging it. Interested in what issues folks have had parallel connecting 72V lithium batteries? I can see how series connection of six 12v lithium could lead to some unbalanced cells and eventually BMS issues, but not as obvious to me why a parallel connection would cause issues.

Someone is insisting on pissing on an electric fence.

Once you’ve done that, LMK. I have patented 4 step program to fix your old gem.

Something else to consider when picking lithium batteries is the “C” rating for maximum battery lifespan it’s generally ideal to stay under about 1.5 C, but it all depends on the battery specs. The C rating would be how many amps are put through the battery when being charged or discharged relative to battery capacity. So if you have a 40ah battery, and are pulling 200 amps, that battery has a discharge rate of 5C (200/40=5). Even if you have 2 in parallel, in my opinion it’s too much amperage for those batteries. And your gem car will consistently pull at least 200 amps and possibly up to 350.

There would be no problem with a series parallel battery pack as long as you have a proper BMS that is connected properly, the problem with a 72v battery is that it will (or absolutely should) have an internal BMS to monitor the individual cells inside the pack. As others have mentioned you can’t really have more than one BMS on a system. If the battery doesn’t have an internal BMS RUN!!! That would be a sign of cheap batteries mad by a company that doesn’t care if they burn down your garage and anything else around it, so the battery quality itself is also probably crap.

Give us a link to the batteries. Your math is correct. 80ah is fine.
Why someone would make a 40ah motorcycle starting battery is strange. Yet I haven’t researched it. Maybe it’s the norm.
It is imperative to ask the manufactuer if the 12v batteries can be connected 6s. Ie. have 72v rated bms mosfets.

Or are these E-bike batteries? That would exlpain the high capacity.

You seem very knowledgeable, electric wise, parallel connections have no obvious issues in theory. In practice a nightmare. There is no way to achieve perfect current sharing. So, one bms may trip often. How would you troubleshoot 12 batteries? I guess it’s possible driving around with ammeters connected to individual battery leads.

40ah drop in lithium for less than $250. It’s a thought.
I’m open to new ideas.
Again, post a link so we can do a proper critique. 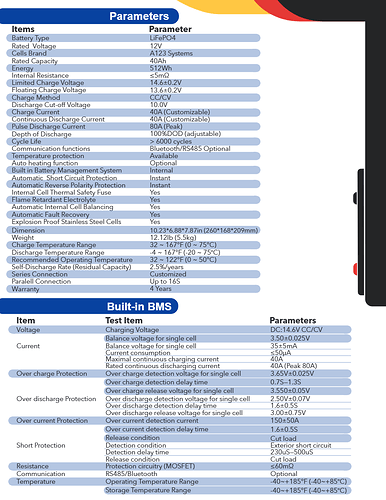 @Inwo - Yes- I think what DougK is targeting is a battery from an eMotorcycle. Not a start battery but a Drive pack. It sounds like he has some sort of source on a couple of these.

@DougK - Can you point us to a spec sheet on what you are thinking?
Maybe what motorcycle you are looking to steal this from?

Otherwise we are analyzing a fictional product. I have lots of those in my head.

If they are 72v rated batteries and connected 2p6s, It may have a chance.
But unless the total cost is much less than the $2750 battery that is tested solid, WHY?.

that the BMS may not be rated for full pack voltage

Welcome to the fold.

Thanks for all the comments…although I’m not sure what to make about jrjava’s comment about pissing on an electric fence! Anyways, The batteries I was looking at don’t seem like a good fit. They’re 72V, 40ah batteries, with BMS rated at 80Amps max. Deep cycle bike batteries, not starter, but they’re $950 each, and to comfortably handle up to 350Amps I would need 4 of them. So looking at around $4K for a 120ah system, which is more money and more range than I need. For some reason I was thinking the max draw on a GEM was around 150amps, so thought i might be able to get by with just two in parallel in a 80ah system, which I estimate would give me about 23 miles of range, which is about what I’m looking for. For me something in the 70-80ah range is perfect, and looking to spend around $2500 or less.

Oh, and here is a link to those 72V ebike batteries on Amazon. (select the 40ah version to get specs with 80AMP BMS) 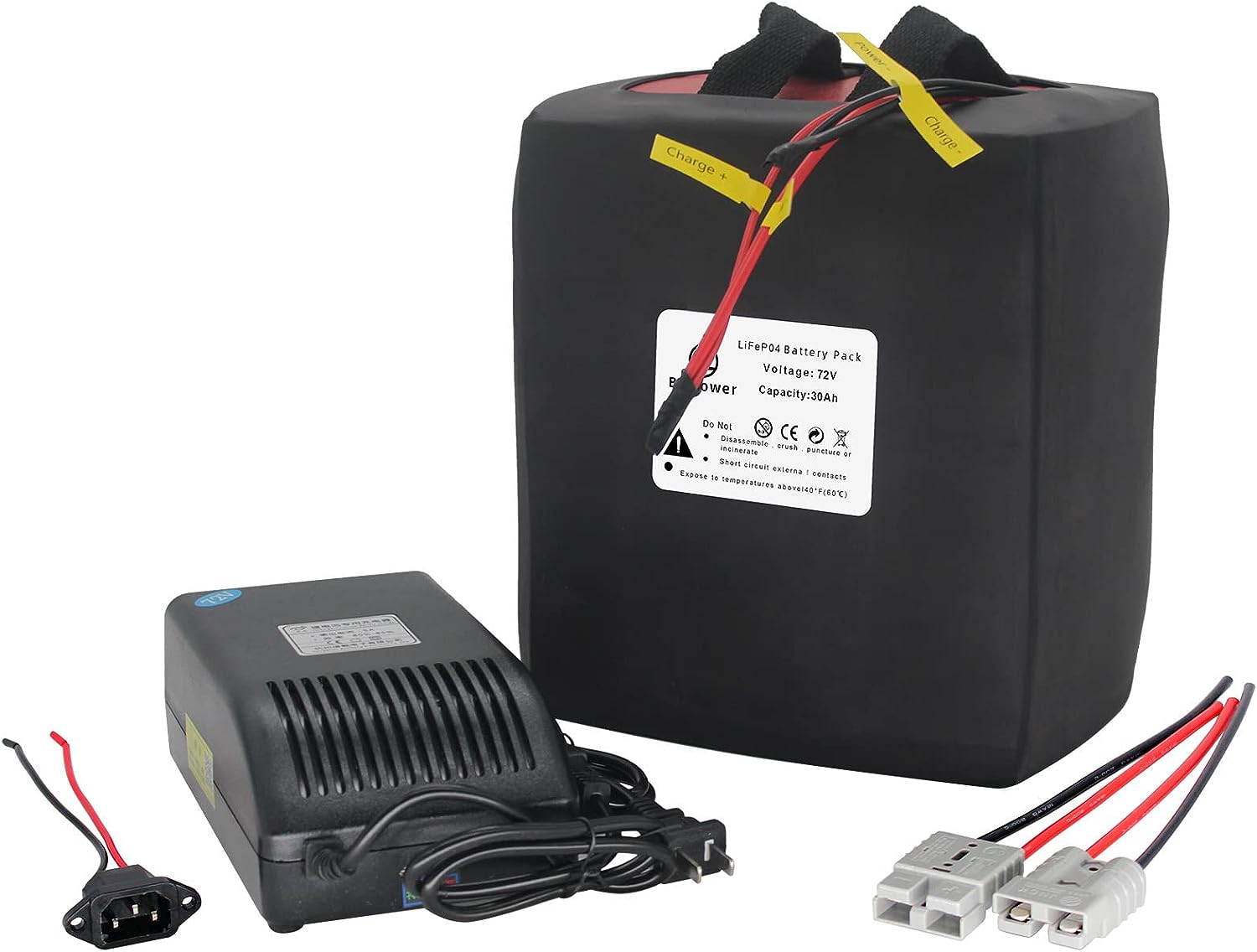 This is a series of 72v batteries. 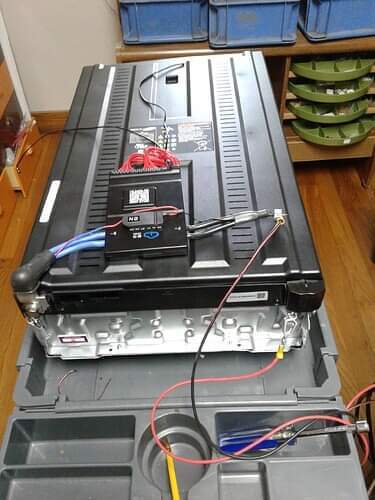 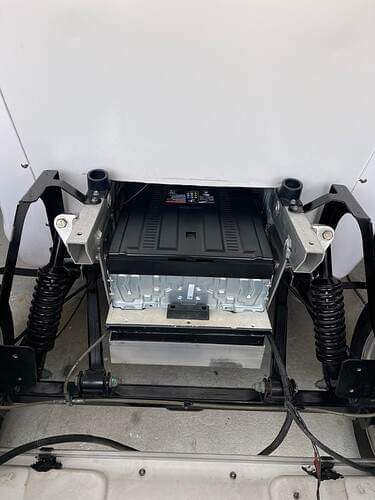 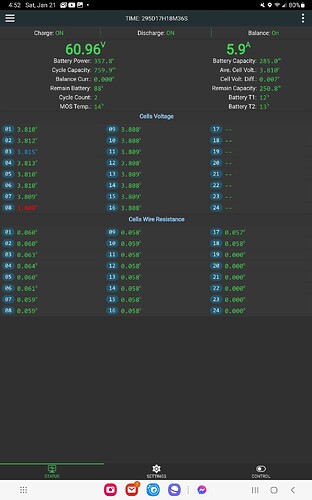 although I’m not sure what to make about jrjava’s comment about pissing on an electric fence!

It means you like your dickhole to tingle by trying the oft repeated and always failed inadvisable path, somehow thinking you may achieve a different result. lol.

It’s nothing personal, this topic comes up all the time. You are the second one this month so far. It gets old answering the same questions and the same explanations, and often times, the same arguments with the person who is trying to justify via logical fallacy how these LFP batteries with built in BMS are right and everyone here is wrong. Some of these guys that are responding are the first people to ever put lithium packs in GEMs and have been always moving forward with technology since. Impressive resumes of accomplishments and knowledge that they won’t wave in anyone’s face.

You, on the other hand, seem to be that one out of a hundred or a thousand that is open minded and willing to listen. So please don’t take my comments too seriously, I’m just the house comedian.

And I also cook.

Let me apply the translator…

If you poke around in the archives long enough you will find some of the same names going back many years. These guys have been trying to find a cheap source for a good battery and what it would take to power these cars. Regular readers are free to jump in and ride along with the current trending ideas and even share in the testing of the wild ideas. Countless hours and personal dollars were spent on marginal results, and mostly abandoned.

These guys have more/less figured out what might happen when that wire gets pissed on, You know you shouldn’t do it, but still someone wants to try it.

To make the sting just a little bit tinglier, I noticed that your linked battery is Lifepo4. Aside from the other issues discussed above, it is the opinion of the group here that this chemistry is not robust enough for use in these cars. It works for a while, but quickly breaks down.
LiFePo4 has been tried and found wanting.